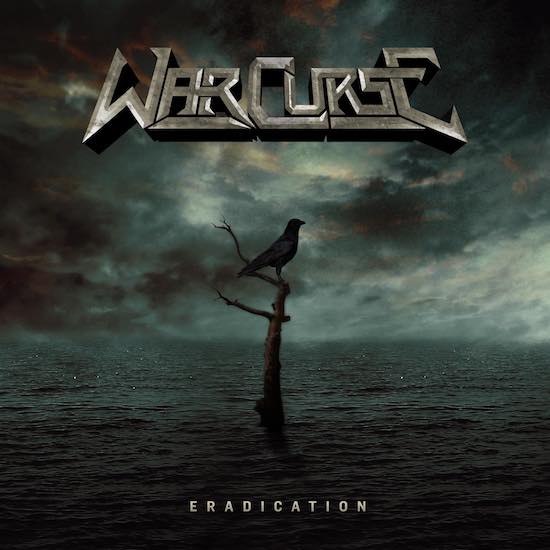 Roughly 30 years ago, US American thrash began to lose its dominant position - and a great part of its relevance as well. Yes, there are bands such as Warbringer, but they don't give new impulses. Now comes the second work of War Curse and everyone who is familiar with Forbidden, Sacred Reich or Vio-lence will identify the influences of the five-piece very quickly. Not to mention their guest musicians like Glen Alvelais, but honestly speaking I am no friend of namedropping or an invasion of guest musicians into the sound studio. Details aside, my first thought was that I am listening to just another thrash output, not bad, but also not extraordinary. I just was happy that the artwork counteracts the idiotic trend to disgrace thrash albums with multi-colored, ugly and cheap artworks.

However, I was wrong. Eradication just needs some time to reveal its full flavor. Of course, War Curse also do not present something completely new. Nevertheless, they impress with their raw maturity. The riffs are precise, the galloping guitars create a dynamic flow, the rough voice knows no wear and tear and the rhythm section provides a more than solid fundament while changing velocity masterly. The result is an accumulation of really neck breaking crowbars like "Serpent" with its brutal yet technically flawless appearance. Oh, what a beautiful morning, the album brings back the glorious days of the Bay Area. Of course, it is almost impossible for newcomers to catapult their album in a row with "Independence", "Forbidden Evil" or "Eternal Nightmare". Nevertheless, War Curse work very hard on closing the gap. Wherever possible, they avoid melodic elements successfully and raise a storm that leaves no stone unturned. Song by song is hammered into my rotting brain and I feel the album has the potential to infect the global thrash metal community.

Perhaps the dudes should have arranged the track list differently. Exactly the two songs at the beginning do not fully convince. They are free from major deficiencies, but the real feast starts with the later tunes. War Curse are able to combine technical abilities with song-writing skills and they find the balance between pure fury and a grain of catchiness. The choruses of "Iron Veil" and the title track take the direct way into my long-term memory, to mention but one example. Especially the latter with its Forbidden-like melody line pleases me very well. Moreover, the excellent production sets the right frame for the musical content. It is bone-dry, precise and merciless - the guitar sound lies in close proximity to perfection. It conveys the most essential element of thrash in a very proper way. Of course, I am talking about energy and honestly speaking, I feel ten years younger when listening to outputs such as this one. Okay, my real age minus ten is still much too old. But it's never too late to seek for a minimum of eternal juvenileness or even a tiny touch of immortality. And thrash metal, that's for sure, will never die as long as it is fed by newcomers like War Curse.