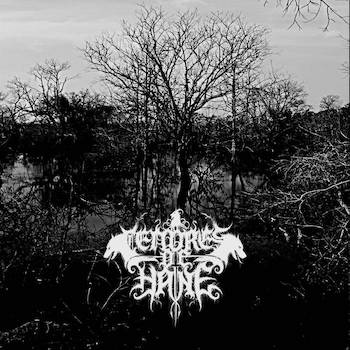 Cendres de Haine? Honestly speaking, I had forgotten that I possess an album of this group. Well, the duo from Switzerland seems to be an insider tip. Three full-lengths, but no reviews so far. This speaks for itself. However, the here presented album is not totally bad. The hollow sound of the snare and the production as a whole are not convincing, but they also do not destroy the overall impression completely. Nevertheless, the album suffers from different wounds. Generally speaking, the dudes release a black fury ("Sommeil Ivre"). However, sometimes they want to generate a hypnotizing atmosphere, but the guitar work fails. Tremolo picking alone is not enough, everything stays on an average level. Bands like Do Skonu or Vietah can do this kind of metal much more efficiently. And the fact that the fourth song should have been shortened does not make things better.

Nevertheless, whenever the band starts to trigger a storm of black metal, it cannot be ignored that the ruthless parts of the compositions have a certain flair. Cendres de Haine do not consist of the best songwriters the world has ever seen, but misanthropic songs like "Foi en Décomposition" are performed with passion. To be honest, I don't think that the compositions suffer from a wrong attitude of the band members. I do not doubt their integrity. The problem seems to be that they cannot reach a higher level, no matter how hard they try. That's slightly tragic, but it matches the mediocre production. Sometimes the guitars are sidelined by the mix of vocals and drums and it goes without saying that this way of proceeding is doomed to failure. Speaking of the vocals, they echo over the rumbling sound of the instruments and add nicely insane screams occasionally, but they do not show up with any kind of individual feature.

Does anybody know why the formation decided to cover Agent Steel? Me neither! This speed metal song does not fit the context, neither in terms of music nor in terms of the vocals. Cendres de Haine pull down the classic on their usual level and that's nothing less but a cardinal sin. Stop violating the anthems of the pioneers! The best detail of this adaption is that it brings the album to an end. All in all, the songs of Nihil Mirari are too weak to leave footprints. If they show the full potential of the duo, it might be a good idea to lay down the guitars and drink some beer instead, even though there exist a lot of worse works in the metal galaxy.