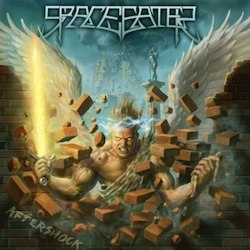 ...Boško Radišić (R.I.P.). He was the lead vocalist and main songwriter of Space Eater and this band carries the banner of speed / thrash metal through Serbia. The fact that Boško died at the age of 28 is a tragedy, no doubt at all. Aftershock has become his musical legacy, but regardless of the quality of the album, this is just a cold comfort. However, let's dive into this album. So much is revealed, it is worth the time.

Space Eater present the whole package. Absolutely nothing is missing, the songs boast with melody, speed, energy and force. Perhaps the mostly high-pitched vocals are not everybody's cup of tea, but they add the speed metal element and fit the old school approach of the songs very well. Space Eater are not here to be the most brutal speed / thrash band of all times, they have put the focus on smooth structures and the flow of the tracks deserves the listener's attention. The songs don't lack breaks and tempo variations, but all parts blend seamlessly with each other. One can discuss whether it was a good idea that the dudes recorded a track that exceeds the seven minutes mark, because "FAA" is at risk to derail during the long and somewhat tired instrumental part at the end. But experiments are not forbidden (as long as they do not gain the upper hand or result in lukewarm ballads), and Space Eater know very well how their music should sound. The production underlines this statement.

Aftershock glitters with a nearly perfect sound. It's warm, vigorous and robust, well-balanced and equipped with the necessary degree of sharpness. Even though Space Eater always keep an eye on a certain level of melodies, the guitars present cutting riffs and furious parts in abundance. I really like to experience that the band does not run out of breath. The riffs of tunes like "Quantum Leap" or "No Retreat" sound as lively as those of the first tracks. Boško masters all pitches and his vocals form a very smooth liaison with the contributions of his band mates. But don't jump to conclusions, the harmonic overall view and an appropriate amount of aggressiveness are not mutually exclusive. Unfortunately, and maybe due to the death of Boško, the last two songs present another vocalist. Luka "Tower" Matković, who is mainly responsible for the guitar, does a solid or even good job, however, it was the right decision that he let Radišić go ahead. His two songs have a little less charm than those from and with the original singer, because they are more violent than the first tracks. Normally, that's not bad, but here it changes the sound colour a little bit.

So if you like pretty catchy speed / thrash metal that combines vehemence and musicality in an almost flawless manner, Aftershock gives you exactly this kind of sweet-tasting poison. Ten songs, at least nine hits, what else do you want? Maybe a last point of reference - the wall crushing creature on the cover has obviously borrowed its enormous wings from the fighting angel of the first Angel Dust artwork. And I am sure, these two guys understand each other very well, in particular in terms of music. Enough said, enjoy Aftershock.