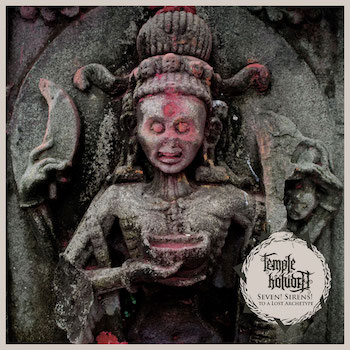 One hour long and not a dull moment exists on Temple Koludra’s debut album Seven! Sirens! to A Lost Archetype. Hailing from Germany this 2-piece project has bulldozed their way into the black metal hemisphere, mixing ambient sounds with a touch of melody and a shit-ton of aggression in the drumming and vocals, this album reeks of a 2nd wave wine that has been brewed some time ago, but lay dormant aging beautifully until ready to be picked like a rose. This took me by surprise, it's not very often I can sit and listen to what has become of black metal for an hour, yet the way Temple Koludra has stirred the cauldron in the manifestation of this spell is astounding. Determined to deliver a most malicious mark on the skin of the genre, Seven! Sirens! to A Lost Archetype is currently looking as though it will overtake many in the quest for the blackening throne.

The music on here is melodic, ambient, aggressive, tight and most of all unbelievably praiseworthy. From the opener “Trimurti” to “Grey Apparition” you are left in a daze drifting away in utter wonder and awe of how expansive and beautiful the music is. As stated before, it's no easy task to sit through an hour of the shit that passes as black metal today, but in Temple Koldura’s case it’s a fucking delight. The musicianship is tidy yet is still able to conjure an atmosphere of chaos, misery and blasphemy. Listed only as M:W and I.H, this obscure pact must be involved in other prestigious projects hence their ability to unleash such a ferocious dusk within the genre. The guitar work is all over the place (the good places), riffs and rhythms lash with precision and a bit of unpredictability, the drumming changes its tempo and technique at the segments needed, the vocals are varied and do a damn good job of convincing the listener there's an evil manifestation trapped in the cd clawing its way towards the innocent light to devour hastily. Temple Koludra fancies in portraying.

At times you're greeted by mellow hooks that go absolutely bananas with the blast beats, then other times such as on the song “The Diadem Will Last”, you're given a bluesy mix of eerie, doomy, melodic tones like some stuff straight out of the mid-70s. Again, its variety that keeps this one hour long journey a memorable one, each song is significantly diverse from the others, either the tempo, rhythm, emotion or just overall construct of the song changes on each new entry yet it all feels connected. When the ambient passages are introduced they align well with what the guitars and drums are doing, so there is never a moment that seems unnecessary. Love the accentuation and mollifying of the aggression when needed for the ideal result in melodic and ambient coherence. As mentioned before there is a strong second wave vibe coming from Seven! Sirens! to A Lost Archetype, the tremolo riffs definitely amend themselves plausibly in providing that layer of melody to the ambiance and aggression hitting feverishly on every track.

The drumming is smooth, transitions sustain the flow of the music whilst expressing a bit of technicality such as on the final track, "While I Trance". And what a title to give this recording as trance is the ideal word to describe this final plundering blow to the consciousness. It has all the goodies pieced together in a slick sounding effort. The emotions vary here, they're melancholic, hostile and even seductive on some instances. The configuration of Seven! Sirens! to A Lost Archetype should secure a spot for one of the most memorable of 2019, It's clear that the individuals behind this are more than passionate in mending a fabric that will withstand the element of time.

I can almost guarantee that once you've invested your time in Seven! Sirens! to A Lost Archetype, you will realize and appreciate just how detailed, extensive and enjoyable the record is. It’s an hour long outing that feels like 30 minutes. Temple Koludra are definitely on the map now, there is no denying they are passionate about the hunt and this record proves it in every way. Very eager to hear what's next for this band; I hope they don’t go unnoticed and swept aside, this material is killer!