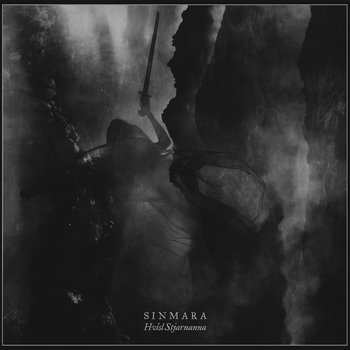 Sinmara from Iceland is a band that drives me to despair. The dudes always give me the feeling they could have the potential to forge a perfect album, but in reality they do not even come close to perfection. Their unorthodox black metal wants to be more multi-layered, somehow blacker and more meaningful than the music of a “normal” genre combo. Yet at the end of the day, things don’t turn out the way they should. Hvísl Stjarnanna doesn’t change the status quo. It extends the line of outputs that are neither bad nor do they fully reveal the band’s ability to transform its talent into fantastic songs.

Over-ambitious and wayward while spitting on the conventions of a genre that itself spits on “normal” musical conventions, this is the way Sinmara operate. The result is half a dozen marginally overloaded tunes that have their good moments. They grow and they create big black holes, but the focus on the songs themselves vanishes exactly in these holes. Perhaps I should take this album as a sort of black metal opera where the overall atmosphere is crucial. But I am sorry, my old school 80’s mix tape asks for single highlights. Okay, the intensive title track has many positive elements. Its lines are hovering through space and time and invite the listener to take a journey through her or his own mind. What a shame, my mind is a small and dark place where thousands of brain cells are dying each day without having ever really lived before, but I guess I can’t blame Sinmara for this. 'Apparitions' is another good track. The opener kicks off the album with ominous guitar tones and creates a proper whirlwind, in particular at the fast-paced ending.

However, I wish the songs would have clearer contours. Sinmara are like a somewhat confused hiking guide. You trust him, you follow him, but you also see that the route he is taking does not always make sense. For example, this guide does not like to take a shortcut. Dudes from the island in the Atlantic, every now and then it is not forbidden to write a song that does not cross the five minutes mark. Compactness is something the artists are neglecting in an almost painful way. From this follows that the mix of the commanding, deep voice, the opaque guitar lines and the variable drums does not have the desired effect. Okay, even in view of its slightly blurred production, Hvísl Stjarnanna is a good output, but it offers not many moments that take your breath away. Compared to their talent and their skills, Sinmara run the risk of becoming constant underperformer. With the exception of 'Crimson Stars' that occasionally holds some pretty light and inadequate guitars, all songs reach a solid level, but is this really enough for a band with courage, style, instinct and ambitions? Don’t think so. Thus, I feel desperation is coming closer. Will Sinmara be able to manage the (necessary) turnaround in order to advance into the regions of 80+X percent?