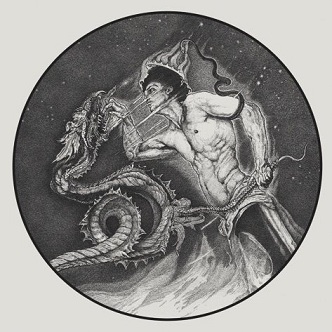 Sinmara are one of these pretty ambitious bands from Iceland that perform a very individual black metal approach. Given this situation, it is no surprise that their EP from 2017 does not dish up subgenre fast food, but complex tracks that do not lack twists and turns, not to mention tempo shifts. Their formerly shown affinity for dissonant, sometimes nearly nerve-shattering sounds does not play a prominent role here, but the band still fights against any form of conventions, if we neglect the genre-usual raw voice. Speaking of the vocals, they do not express an overdose of profound hatred or murderous insanity. Instead, they convey a feeling of masculine melancholy. This fits the music, because Sinmara present a rather relaxed kind of black metal. Hyper-speed, total misanthropy or brutality for its own sake are not on the agenda of the islanders.

Honestly speaking, I partly miss the aforementioned features. Within the Weaves of Infinity appears somewhat overloaded. Perhaps it was not the best idea to set the musical bar that high. A well-defined smack in the eye can work very well too. But of course, this is not the Icelandic way of blackness. Thus, I have to arrange myself with the three pieces the way they are, and I admit that they do not lack coherence, substance and diversity. Nevertheless, with few exceptions, the single parts do not transport the feeling that made me curious to listen to each and every black metal album I could get hold off. “Nine Halls” makes the stormiest statement. This track lies in close proximity to the songs I think of when it comes to black metal, but it does not have that special aura to join my private hall of fame.

The production does not please me, because the material sounds pretty blurred. Directness and pressure are missing. To call the sound a mishmash would be a tad too much, but black metal without powerful drums is a discipline only Darkthrone are (or: were) able to manage. The guitar tone also lacks malignancy and in view of all these details, I am slightly disappointed. I like ambitious song-writers, but I like good songs even more. Sinmara should decide whether they want to play music for their followers or rather for themselves. Both is legitimate, I just would like to it.