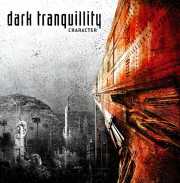 Although Character is fundamentally a melodic death metal album, it does have elements of power metal and European speed metal. Essentially, Character is a continuation of Damage Done. Both albums convey dark images painted by lyrical mastermind Mikael Stanne. Stanne’s harsh raspy vocals give set him apart from most melodic singers today and his lyrical creativity and vocal approach sound the best they have ever sounded.

Character can be described in three words: melodic, epic, and fast. What sets it apart from Damage Done is the speed. Character is a very fast album. Anders Jivarp does a superb job of speeding the album up with effective use of double time drums and double bass. Jivarp’s performance on Character is probably the best I have ever heard from him. Bassist Michael Nicklasson does an outstanding job of backing the guitars and playing along with the bass drum, making each kick of the bass drum sound impaling. Guitar virtuosos Niklas Sundin and Martin Henriksson prove that they are not only able to lay down amazing guitar melodies, but also that they can thrash and pound just as hard as they did on Skydancer. The role of keyboardist Martin Brändström is elevated; each track features a great amount of synthesizers and keyboards. We're not talking about what you would expect in a Children of Bodom song, but rather the keyboards provide ambiance and mood to each track and fill up any empty space. The track “Lost To Apathy” is a perfect example of this.

The composition of this album is nearly flawless. Each song has a build up and a moody chorus (whether it be heavy or not) and an extremely well thought out instrumental. Each instrument is recorded in purity and the potential of each musician is highly eveident. Additionally, unlike the production on Damage Done, the production on Character is less clean, but in no way dirty. Gothenburg’s legendary Studio Fredman has once again worked its magic as the production enhances the band’s vision of making a heavy record.

Character is the sum of all the best pieces of Dark Tranquillity’s past albums. Each track shines with elements from every Dark Tranquillity release: the speed from the band’s roots in European thrash, the melodic and epic feel from Haven and other mid-career releases, and the keyboards of Projector, Haven, and Damage Done. Character is the ultimate and definitive melodic death metal album for the new millennium.