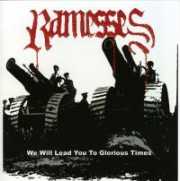 After parting ways with UK stoner doomsters, Electric Wizard, a band that made no compunctions shortly before their breakup that they really got on each other’s tits as a group, drummer, Mark Anthony Greening and bassist, Tim Bagshaw (current Rammeses guitarist), got together with longtime friend, Adam Richardson (ex-Spyrmyard), and started jamming. Their jams were a combination that lead to complaints in the thousands to the Wimborne on Dorset Environmental Health council (that’s instant cred right there kids!). Out of these jam sessions, Ramesses started to coalesce, or maybe ‘coagulate’ is a better term. The end result can be heard on their debut album, We Shall Lead You to Glorious Times.

While maintaining some of the stoner elements of Electric Wizard, Ramesses really stands on their own as a separate, musical entity from the get-go. This four track album contains songs of atmospheric dirge riffs and sludgy arrangements, reminiscent of Unearthly Trance’s earlier work. The use of black metal harshness on the vocals of opener, “Witchhampton,” and the underlying, doom ambience of the 10-plus minute epic, “Black Domina,” go a long way towards establishing this trio as a force unto themselves. Bagshaw shows a remarkable enthusiasm in his guitar work, something he apparently lacked on the bass, and Greening’s drum work is precise and aggressive. Richardson’s vocals are excellent in all their incarnations, from soulful groove, to black grimness, to cavernous growl, they compliment what is needed for each song, perfectly.

The overall end result of We Shall Lead You to Glorious Times is an excellent starting point for the band. It’s recommend for fans of early Cathedral, Unearthly Trance and anyone who wants to see what happened after Electric Wizard ver. 1.0.