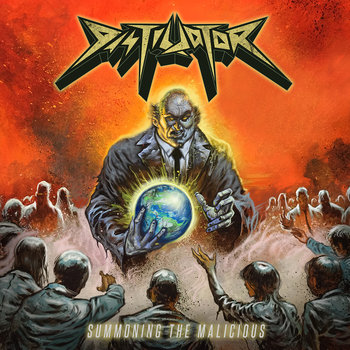 These Dutch dudes came into my metal fan existence with a big bang. Their perfect contribution to the split with Space Chaser made me more than curious and I wanted to get a second sample of their prowess quickly. Like many other contemporary outputs of the genre, Summoning the Malicious suffers from a mediocre artwork, but it holds nine thrash tracks and the musical content forms a very interesting album, even though it was more or less quite clear that it does not deserve the same rating as the once in a lifetime songs of the split.

First things first, Summoning the Malicious is pure thrash metal. However, it does not lack diversity. The gloomy, rather slow-moving 'The King of Kings', for instance, stands in sharp contrast to its overwhelmingly dynamic neighbor called 'Stature of Liberty'. Both tracks belong to the absolute highlights; but the latter one impresses with its highly energetic guitar lines, the contagious solo and the catchy chorus, while the opening riff of 'The King of Kings' obviously pays tribute to the guitar work and the mood of the title track of Overkill's "Horrorscope". Trace elements of "Chemi-Kill" (Exodus) can also be identified. Both tunes are simply fantastic, and the band demonstrates that it is not limited to only one song pattern. And they have another thing in common - these jewels, as well as the remaining tracks, benefit from the down-to-earth sound. The full-length is neither overproduced nor does it suffer from a wrong understanding of the demands of the underground. This is just a sound that fits the performed music very well and already the pleasantly rasping guitars of the opener's first riff underline that Distillator don't do things they don't understand.

Generally speaking, the riffs do what riffs on a thrash album have to do: they play the main role successfully, they embody the stimulating force of the music style and give the songs their aroma. Thus, Distillator always stay on track. They say on their homepage that they sound like it's 1988, but I rather tend to 1985/1986, because this album has a lot of the energy of "Reign in Blood" instead of focusing on the controlled aggression of "South of Heaven". Anyway, the guys from Enschede do not reinvent the wheel and connect high-pitched shrieks with rapid guitar lines. The unleashed title track picks up the directness of classics like "Strike of the Beast" and, as mentioned before, the musicians have seen no reason to mix their thrashing madness with influences from other sub genres. This is no black / death or fun thrash; the material reflects the pure creed. The lyrics also respect the guidelines of the sub-genre. I have never heard before of an 'Algorithmic Citizenship', but the lyrics of this fast-paced, catchy and brilliant number degrade Orwell and Huxley to amateurs in terms of dark future scenarios. Big Brother, do you like this review? (Don't think so.) The aforementioned 'The King of Kings' also deals with an interesting subject, the so-called "Operation AJAX" from 1953. The UK and the US of A demonstrated their noble understanding of the self-determination of peoples and tried to overthrow the Iranian government. And for what reason? Oil, of course. I really like this kind of lyrical topics.

In short, all tracks are great and some of them are absolutely immaculate! Apart from those I have already expressly mentioned, I must praise two high-velocity eruptions - the pulsating 'Mechanized Existence' with its excellent flow and the title track due to its lively guitars. If the band drives its tour bus as fast as it plays its instruments, the dudes will get in conflict with the obedient vigilantes of their home country. And to avoid misunderstandings, the less rapid pieces like 'Estates of the Real' also shine with exquisite guitars. Which fool said that the album would not be able to enter the realms of perfection? These riff-masters from the Netherlands are absolutely on the right way and it makes me somehow proud that the music of my youth hasn't lost anything of its fascination. Distillator, countless divisions from Greece, Terrifier, Battery, some German combat units, Steel Inferno, Shakma... all these formations build a kind of hidden empire. The fiery, eternally juvenile and rebellious spirit of thrash metal seems to be undying and therefore this sub-genre is the backbone (or the first among equals, or, to say it with the band, the king of kings) of the global metal scene - at least from my point of view.