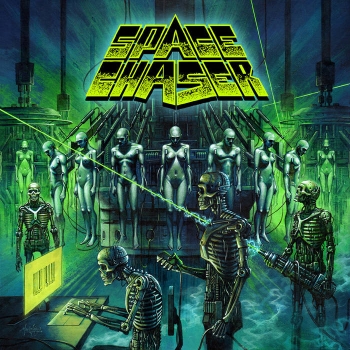 Thrash metal thunderstorm! I am really impressed. Distillator from the Netherlands achieve a level of intensity that many of their competitors do not even reach in their wildest dreams. A maximum of density coalesces with an overdose of determination and passion. They romp like hyperactive children who have consumed the entire stocks of energy drinks of their chemicals-loving parents. (Due to many recommendations of an absolutely perfect woman, I have also begun to drink these healthy liquids. Unfortunately, I haven't even achieved the smallest degree of perfection so far... but I guess this does not matter in this context.) Furthermore, they know the roots of this unique music style. Of course, it is impossible to improve a classic like "Black Magic", but Distillator's adaption is probably the most worthy Slayer cover ever. The fury, the precision, the explosiveness after the intro sequence, the breathtaking velocity and the ear-splitting, well-dosed old school high-pitched screams - so many single components give this monument new life. Slayer lose against their own composition! I don't need to learn new lyrics! Fantastic! It's great to listen to this crossfire, even though the band does not need to pick up other people's compositions. Their own songs also trigger a violent orgy of devastation and leave no stone unturned.

Already the short intro brings the dead back to life in view of its mind-blowing, raid-like guitars. "Perceiving Presence" and the marginally less thunderous "Gates of Autonomy" split skulls in abundance as well, but everything culminates with the absolutely larger than life thrash metal inferno called "Swarm Intelligence". Of course, already Eruption knew that "nothing stops the swarm", but Distillator are much more furious, ecstatic and reckless than their competitors from Slovenia. (Nevertheless, everybody with a weakness for great thrash must check Eruption as well.) In short, if Distillator releases a full-length of that quality and with such a powerful, clear but not sterile production, the kings of furious, modern thrash (Terrifier - whoever else?) could be confronted with the fact that their throne begins to crumble. Be that as it may, Distillator deserves not less than 100% for this riotous demonstration of power, might and frenzy. (A worthy percentage for review 1.111, isn't it?)

It goes without saying that Space Chaser from Germany have no chance against the Dutch domination. (But at the same time, they profit from the strength of their partners as long as we cannot give two ratings for split albums of two bands.) The five-piece follows a less brutal approach and sometimes they remind me of the more vehement songs of Trauma's debut "Scratch And Scream". But they don't lack currishness and do their best to add value to the split as well; and, by the way, they are successful. Does the band deliver anything new? No, but the dudes know their craft and their mid-harsh thrash compositions show no major deficiencies. Only minor details like the slightly vapid intro or the rather feeble background vocals hurt the coherent overall picture, while the traditional lead vocals reveal an unexpected variety. The lead singer sounds like the little brother of Bobby Blitz. However, Sanctuary, early Anthrax and Overkill shimmer through the songs and these are good references. You see, Space Chaser are anything but a bunch of incompetent losers. Both their own compositions (especially 'Virus' and 'Waves') and the cover version hit the nail on the head. Their only misfortune is that they are put together with an enemy in top form. 76% for their strong performance and for you, dear reader, the recommendation to get this split as soon as possible.