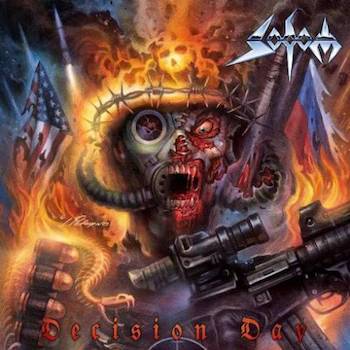 From my point of view, it took 12 years (from 2001 to 2013) until Sodom were back on track. M-16 marked their final explosion for a long time, because two studio albums with new songs did not meet the expectations in terms of fury, quality and energy. The Final Sign of Evil wanted to reanimate the spirit of the early days, but it was also ambivalent, because a journey through time and space is always extremely difficult (especially when collaborating with a drummer who is suffering from alcoholism). But Epitome of Torture made clear that Sodom had regained its strengths and the overwhelming opener of Decision Day is another track that makes us forget this weak period of the band. A sinister line introduces the monumental "In Retribution" nearly cautiously, but the inferno breaks loose as soon as the veterans pick up speed. Straight leads, competent hammering and the well-known, mean and roughshod nagging of Angelripper lead to an apocalyptic, threatening chorus. Welcome to Decision Day - its trite cover leaves room for optimization, but the first track is free from any disturbing details.

The opener shows sustainably that Sodom have not become a more or less soulless accumulation of musicians. Do not confuse them with Kreator! Sodom's harshness still sounds honest and authentic, Tom Angelripper still looks pretty filthy and blatantly simple choruses ("Satan is real! Satan is real!" - I still wait for "Mille can't sing! Mille can't sing!") do not show up. The same applies for overly emotional sections. A few calm parts do not characterize the album which relies on generic, coherently constructed thrash. Of course, the material is more melodic and less black than that of Obsessed by Cruelty, but to believe that it can be described as melodic in objective terms would be a little bit stupid. Jagged riffs alternate with pretty well flowing leads. In addition, the breaks and tempo changes are seamlessly integrated in the overall design of the respective track. Seems as if Angelripper's wide experience prevents odd song patterns. Better still, he also knows to offer catchy choruses ("Caligula") that do not suffer from any kind of commercial ingredients. Background choirs are helpful in this context. The simple "aaaaahhh" of "Who Is God?" gives this track an additional flavor which is the icing on the cake of this riff-driven speed rocket. By the way, although I guess you are already aware of this fact, Sodom's composition does not focus on simplicity. The degree of variety is more or less perfect - it gives boredom no chance without overstraining the audience.

Sodom still like rapid rhythms, but they also manage the challenge to create mid-fast monsters with well hung riffs. "Strange Lost World" almost appears as an enemy to the dominating high velocity eruptions. This does not mean that it is a foreign body on Decision Day, but it spreads very different vibes in comparison with the other tracks of the album's first half. Anyway, the level of heaviness as well as the average velocity have not significantly changed in comparison to its predecessor. Sodom did not record "Epitome of Torture Part II", but there are no noteworthy modifications in terms of style. Moreover, Bernemann's solos still make sense. Some guitar heroes just create a noisy ego-trip, but this old warhorse does not give a f**k about narcissism. His solo excursions are well embedded in the songs. Incidentally, we are speaking about excellently produced songs. In technical terms, Sodom's 15th studio full-length flexes its muscles. Powerful, transparent, sinister and rigorous, these attributes describe an album whose mix does not lack depth. A comparatively multi-layered song like "Belligerence" reflects the advantages of the production most quickly.

Even though the best and most spectacular part of the album is already finished after 6:14 minutes, the remaining material is full of highlights and only a few tracks such as "Sacred Warpath" do not completely live up to expectations. Yet I don't want to get lost in details. In general, Sodom's evolution is absolutely exciting; once deemed as a bunch of miserable anti-musicians, they are now the spearhead of the so-called big four of German thrash. Honestly speaking, they are the only band of this aging quartet whose new works still add value to their luxuriant back catalogue. This does not mean that Angelripper's triumvirate is entirely immune against rather lackluster outputs, but Decision Day is definitely an awesome record. Let's go on for the next 15 albums.