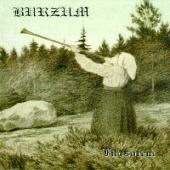 If proof of this were still needed, the previous reviews demonstrate it in a very clear manner: I am absolutely narrow-minded, at least in terms of metal. I cannot understand how people really appreciate this classic so much that they give a rating of (almost) 100%. As one of the colleagues said, it's an album of two halves and they are so different that I do not have a clue how anyone can love both parts so deeply. But I have to realize that most reviewers have given 95% or more - I beg your pardon that I cannot join the ranks of these well-respected dudes. Varg Vikernes fascinates me with his metallic monuments, but the artistic idea behind the ambient excursions remains hidden for me.

Be that as it may, Filosofem is an outstanding work. The large format of the limited edition with the fantastic drawings of Theodor Kittelsen indicates the exceptional quality of the music. No doubt, the folkloric monochrome pictures and the music of Varg are a perfect match. With both the cover and the booklet, Varg makes clear that black metal has a multi-layered structure - and a traditional, almost somewhat romantic facet. Black metal is a worldwide phenomenon, but it's no global style and much less internationally compatible than, for instance, thrash metal with its US American character. Of course, no law without exception, but hopefully you know what I mean.

But let's get back to Filosofem. To be honest, "Rundgang um die transzendentale Säule der Singularität" (forgive me for using the German name of the title, sometimes I am a patriot) is one of the most boring pieces I have ever heard - and it lasts 25 minutes! This is a violation of the International Bill of Human Rights, isn't it? Admittedly, keyboards can be used cleverly, but their sound was not the reason why I begun to listen to metal. Aggravating the situation, Varg does not use them in an intelligent manner. The fragile, wannabe-mesmerizing tones of the song with the moronic title create an atmospheric atmosphere, but even this description is almost an euphemism. In spite of this atmosphere, the 25 minutes give me absolutely nothing. This means that almost 50% of the album make no sense, at least in my humble opinion. There is not even the smallest bit of metal in this song and inter alia because of this fact, it is just a waste of time.

Thank Odin, the first three tracks are light years away from this sonic soporific substance. Better still, their brute force is combined with truly hypnotic, coarse and irresistible melodies. To avoid misunderstandings, I am speaking of really minimalist yet extremely efficient melodies. They are accompanied by the prototypical, charismatic and raw voice of Varg and convey strong emotions. For example, the stoic and cold "Dunkelheit" reflects deep despair and apathy, but it casts its spell on the audience in a matter of seconds. By contrast, "Jesus' Tod" has more verve. Just like its neighbors, it avoids tempo changes and breaks wherever possible, but its speedy approach makes it unique in the context of the here presented material. The guitar riff seems to consist of thousands of spines that intend to torture the listener. The very distorted voice expresses hate and misanthropy, the double-bass guarantees the heavy groundwork and the devastating aura of this tune is simply second to none. And to close this ingenious chapter of Varg's creativity: "Erblicket die Töchter des Firmaments" lies between its two predecessors. It's great, voluminous, slow-paced and driven by an impressive guitar work. All songs profit from the dense, direct and icy sound of the album. No doubt, the guitars play the main role, nevertheless, the sound is well balanced.

The remaining two songs have one big advantage. They are shorter than the 25 minutes plague, nevertheless, these bastards of ambient and (some) metallic sounds do not really convince. Varg's lamenting voice gives the first part of "Gebrechlichkeit" a certain degree of brutality, but all in all, these tracks stand in the shadow of the big Norwegian spruce which is created by the opening trio. Honestly spoken, it doesn't matter. Filosofem spreads incomparable vibes, it was an identity creating work for broad parts of the scene and it definitely does not lack courage. Varg was a brilliant musician and his (unfortunately pretty sick) brain created an important milestone, regardless of the fact that I did not like each and every tune. So, I give 75% for the music (but three times 100% for the songs of the first half), but let me add 5 percentage points due to the historical relevance of Filosofem.