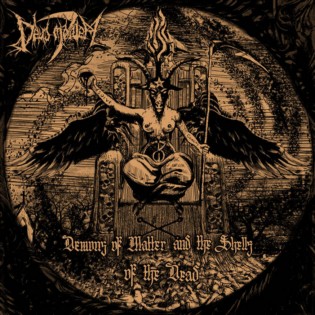 Deus Mortem are back. I possess their 7" from 2011 and due to its considerable quality, the Polish brigade belongs to my roughly 1.233 favourite bands. The dudes celebrate intensive, blazing black metal that combines a lot of exciting elements. Of course, I am not talking about the very symphonic approach of (the late) Dimmu Borgir and the typical ice-cold leads of the more extreme Norwegian role models also do not characterize the here presented songs. Based on a very good production - transparent and crispy, sharp and punchy - and the musicianship of the highly experienced and partly hyper-active band members, the three-piece features thrilling tunes with very different configurations. Already the playtimes of the single cuts vary significantly, and this is an omen for the diversity of the musical content.

The centerpiece of Demons of Matter..., the nine minutes of "Penetrating the Veils of Negativity", offers Graveland-like choirs at the beginning, fantastic up-tempo verses, short blast beats outbursts and... well, experience it for yourself. All parts blend seamlessly with each other, although the song does definitely not lack of variety. Even a slightly oriental, calm part is integrated with the effect that ritualistic feelings force their way. If the guys of Melechesh like to listen to their own music, they will like this track of Deus Mortem as well. "Sumerian" elements are missing, but maturity and fury coalesce with each other and the result is highly amazing. Despite this very well-designed track, the further songs do not stand in its shadow. Deus Mortem have written three fanatic, dynamic and explosive pieces and all of them write the words "Black metal is the voice of the devil" in BIG letters. It doesn't matter whether one listens to the desperate guitar line at the end of the last track or to the murderous beginning of the opener - the fact that Deus Mortem have inhaled the spirit of the sub-genre shimmers through every note.

The stylish booklet has eight pages and that's fine. Nevertheless, the next output should put the focus on a wider choice on music than on a lavish packaging. Yet this is only a very small point of criticism and I also cannot identify any major deficiency with respect to the musical content. Thus, I am sure that Deus Mortem's compact release will enthuse a lot of black metal fans, because credibility, musicianship and spirituality form a strong overall picture. With that said, I give myself the order to start the hunt for their only full-length. Guess this could be another great work of this underground legion, which is definitely worthy of support - just like the outputs of my few further favourite bands.