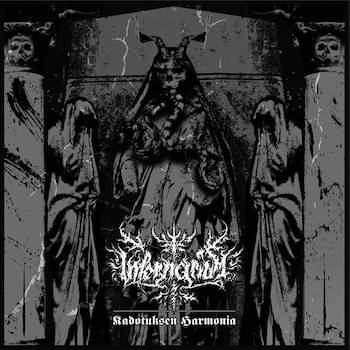 Finland, the land of the thousand lakes and the million black metal musicians, challenges the hard and heavy audience once again. Infernarium from Turku spit their hatred upon mankind in a pretty rumbling manner, because the sound of their first full-length has a really noisy touch. To describe this production with the word "raw" is nothing but a massive understatement. Nevertheless, this work does not sound like a rehearsal tape. The mix develops a certain pressure and, in its best moments, a hellish atmosphere. So, you do not need to fear another "Under a Funeral Moon" sound, the strange rattle and clatter remains the more or less unique selling point of Fenriz and Culto.

Infernarium are familiar with the aesthetics of the sub-genre and their compositions do not suffer from obvious weaknesses. Everything is solidly performed. Tempo shifts guarantee a certain dynamic, although the basic mood remains more or less the same. This is not least due to the fact that the lead vocalist delivers an almost monotonous mix of wrath, hatred and negativity. Well, give the sub-genre what the sub-genre asks for. So maybe this raises the question whether there are any original elements in the approach of Infernarium at all. Yes, there is a pretty surprising break during the second track. It tears the song into two halves and gives room for a pretty sacral intermezzo with a choir of innocent voices. My honest opinion? Experiment gone wrong and unfortunately the same applies for a short airy sequence in "Luvattu Profeeta". The promo text speaks of "tasteful colorings of mystical synth", but who takes this kind of statements seriously? They seem to be written by pathological liars or dudes with a very strange kind of humor. So, what, one thing is certain, the band does not lack courage. Nonetheless, some percent of compositional brilliance are missing. Be that as it may, some of the really brutal sections are fascinating, even though a few numbers of them seems to be borrowed by fairly comparable formations. Fans of Necrophobic will identify elements of "Furfur" in the seventh number of Infernarium's debut, but that's no big deal. The song works and there are much worse idols thinkable than the Swedish legend.

All in all, the newcomers represent their country in a worthy manner and we all know that the bar is set high in terms of Finnish black metal. Those of you who like formations such as Sacrilegious Impalement or Saturnian Mist will not waste their time when giving this album a try. It is neither spectacular nor unique, but it continues the proud history of a style that seemed to be a kind of stillbirth after the ending of this first wave. Melancholy and frenzy go hand in hand and so this album grows slowly but steadily, just listen to the memorable and ominous chorus of "Amen Armageddon". Of course, those dudes who only feel good as long as they have a reason to feel bad will find some points of criticism - the material does definitely not reach perfection. But that's their problem, I don't care and prefer to listen to "Kadotuksen Harmonia" once again, although the Finnish role models such as Behexen, Azaghal or Horna are not at risk to be blown away by the new challengers.