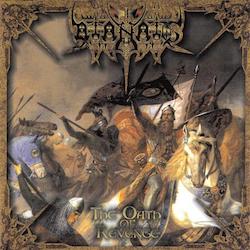 The label (Last Episode) is gone, the band is gone, and more than 50 years of the reviewer's life are also gone. But I don't want to moan about these lamentable conditions, let's have a look at the album from the year 1998 instead. After clearance of all formalities (the work celebrates its 20th birthday this year, congratulation), it gets obvious that the Teutonic formation played a style which is no longer very popular today. The main ingredient of the music is black metal, but the songs do not lie in close proximity to those of the chaotic (Venom) or archaic (Hellhammer) pioneers and the same goes for the material of the Norwegian role models of the second wave. The only comparable bands from the land of the fjords are Dimmu Borgir and, to a lesser extent, Ancient. So, this makes clear that extremely harsh and raw black metal is not on the agenda of Atanatos. This horde rather feels comfortable while playing a pretty melodic form of black metal which is a little bit more melodic than the songs of their first EP. Those of you who accept only the totally "trve" ideology can turn their back on the album and this review right now.

You are still here? Great. Well, "The Oath of Black Blood" sounds like a Mystic Circle album, but it is more competently executed than the original works of these jesters. Atanatos avoid delivering insubstantial tunes, their material is well designed, neither unimaginative nor one-dimensional. The pinch of barbarism or bestiality that I expect from each and every non-ambient black metal song is missing, but this alone won't kill us. It is rather problematic that this kind of music always seems to come from the head and not from the heart. Spontaneity is written in small letters, at least from my point of view. Not to mention the small number of parts that have a slightly kitschy touch. But let's get back to the positive aspects of this output. The song patterns find a good way between complexity and plainness, they are not too melodic, and they flow smoothly. Albeit the keyboards show up a lot of times, they are not the dominating instrument here. The dark, deep voice and the slightly undifferentiated guitars are important factors as well. Yes, the guitar sound could be better, but all in all, the mix pleases me.

During the entire playtime, there are no songs that stand out and there is no downer as well. The songwriters have worked diligently, and they manage to offer a track that flirts with the ten-minutes-mark as well as a compact number like "Dark Age". One can listen to this album without seeking the skip button and the strong closer underlines that the Germans do not belong to these bewildering groups that run out of ideas the longer an album lasts. Therefore, Atanatos offered value for money and from time to time it's fun to dig out their releases again. Too bad that their compositions were good, but not good enough to give them an unmistakable identity.