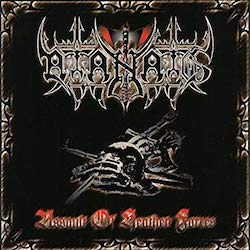 1996 - in the wake of groundbreaking albums such as "De Mysteriis Dom Sathanas" or "Under a Funeral Moon", black metal newcomers are popping up like mushrooms all over Europe. The Germans are not lazy as well and send formations like Atanatos into the competition. Already the booklet shows the heavy influence of the sometimes-criminal creatures from Norway, because the picture of a fire spitting dude cannot reveal the affinity of the band for the leading scene in Northern Europe. Be that as it may, the four songs after the neutral intro surprise with a pretty mature design and a good understanding for diversified structures.

The closer marks the best tracks. Despite its English title, the song is equipped with German lyrics and honestly speaking, this lends the number a special flair. Hopefully, I am not too patriotic, I am just of the opinion that the choice of the mother tongue is always worthy of consideration. Black metal keeps a special form of tradition and therefore it can be a good idea to show your origin. But "Eternal Escape - Under the Black Sky" has more to present than just German lyrics. The lead vocals express dedication and hate, while melodramatic, fervent and almost blast beats driven sequences form a pretty thrilling frame. This track breathes the spirit of the genre and constitutes a worthy conclusion.

Generally speaking, the EP holds competently implemented mid-harsh black metal. The guitars play the main role, even though they leave some space for the keyboards. However, this mostly scorned instrument delivers only some ambient noise. Especially "Whore of Revelation" shows the musical violence and inner strength of the formation due to its pretty vehement configuration, while "Behind the Darkest Woods" almost sounds like a decent leftover of Gehenna's first EP. These details aside, one can say that each and every track adds value to the output. The same goes for the genre-typical production that puts the music into the right light. Having said that, it is no exaggeration to state that the EP marked a promising beginning for Atanatos. Too bad that the band remained a more or less unknown formation during its existence. Nevertheless, if you have the option to listen to Assault of Heathen Forces, I recommend doing so. It is definitely no poisonous mushroom.