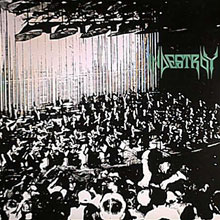 Life can be a lemon and shit happens every day. Therefore, some pretty promising bands fell and still fall by the wayside. Indestroy never came back after Senseless Theories, even though the mini album documented an interesting evolution. The band still played thrash metal, but the songs have more substance, they come directly to the point and fillers do not show up. This might be an effect of the short playtime, because Indestroy were able to concentrate on six strong pieces instead of recording a full-length no matter what the cost. Two tracks of their debut really kicked asses ("U.S.S.A." and "Dead Girls") and their position remains untouched by the here presented pieces. Nevertheless, the entire material of Senseless Theories is convincing without surprising with any type of extraordinary elements. For example, the more or less hateful vocals leave a good impression, but they do not impress with an overdose of charisma. The only atypical detail is the strange artwork. I still do not know what a classic orchestra has in common with the music of Indestroy.

The compositions spread a dark aura, the occasionally bulky riffing possesses somehow negative vibrations and some high-speed parts do not lack aggression, sharpness and poison. It's a pity that a few numbers of breaks affect the flow of the diversified songs. Despite its very intensive, wild and fast-paced sequences, "Terminal Choice" must be mentioned in this context. However, the strongest riffs on this album are delivered by the openers of both sides. "Tortured by Fire" also scores with its intro-like beginning and a certain depth during the instrumental part, while the title track culminates in an explosive chorus that surprises with the charm of a firing machine gun. But details aside, the five regular tracks and the rather atmospheric instrumental "Sam the Butcher" with its tolling bells build form no outstanding or unique, but a quite strong unit. Moreover, this vinyl sounds much better than its predecessor. Senseless Theories has a solid and competitive sound which combines clarity with penetrating power. It fits the down-to-earth approach of the musicians from Maryland very well.

I am not familiar with the reasons why the actually talented thrash division disappeared after the release of this decent EP. The vinyl does not sound like an album of old and tired men. What would have happened without the self-chosen withdrawal of the band? Maybe Indestroy would have been the upright thrashing horde that would not have bowed down to the pretty despicable zeitgeist of the early nineties. Or they would have been the ones that would have kidnapped every so-called musician of the more or less totally useless grunge scene. Or, another possibility, the dudes would have bought every record company in order to stop the confused industry from promoting and distributing this stupid music style from Seattle. But perhaps all these crude thoughts are just a special form of senseless theories.