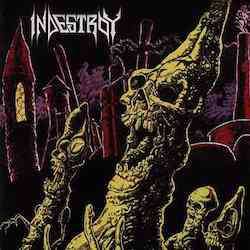 Indestroy never belonged to the really relevant actors of the US American scene. Their first, last and only full-length from 1987 was released by New Renaissance Records and this label was known for second tier combos and low budgets, but not for exciting sound adventures. The self-titled debut makes clear why. The drums are pretty powerless and a tad muddy, the guitars sound more or less acceptable, but only during some wild solos, for example in "U.S.S.A.", they reveal their true strength. Generally speaking, the thin and cheap mix does not ruin the entire output, but it is also no sound which could compete with the productions of the real thrash masters at that time. Even after seven days without sleep, dudes like Rick Rubin would have done a better job. But I have already mentioned the unwillingness of the record company to invest in its bands and therefore the sound quality is no big surprise. Let's be happy that the label added a lyric sheet - this was anything but a matter of course.

Regardless of financial restrictions, the album possesses two hits that I cannot forget until my last day. "U.S.S.A." and "Dead Girls Don't Say No" dish up extremely catchy choruses, excellent riffs and straight song patterns. Thrash metal is no academically interested sub-genre. Just be able to use the easy tools in an effective way. If you do so, it is not crucial whether you offer socio-critical lyrics ("U.S.S.A.") or you prefer to sing about necrophilia ("Dead Girls..."). On the other hand, you can make a text about whatever you want; pretty boring and immobile tracks like "Fatal Sin" will never be relevant. Indeed, the songs of this debut cover a wide spectrum in terms of quality. Be that as it may, one thing is missing for sure. Indestroy did not have the musical element that distinguished them from their competitors. The pretty raw voice does not shine with an overdose of charisma, the riffs are solid and sometimes even very strong, but their majority has no lasting effect. Some run-of-the-mill guitar parts lower the compositional level.

Indestroy's album spreads some devious vibes. The formation from Maryland does not take the highway, but some badly lit side streets where whores, pickpockets and further shady characters are waiting. Everything sounds dark, but unfortunately darkness alone does not guarantee a great record. The whole B side remains on a more or less decent level without offering any highlight. Esprit, momentum and unexpected elements are missing, especially during some mid-paced tunes. The closer almost sounds like the second part of "Dead Girls..." and this fact shows that the core competencies of the dudes did not include variety. However, their music comes from the heart and in their best moments, they play some nice Slayer-like riffs, so I don't want to talk too much about their rather uninspired moments. Thus, if you like to get lost in a time long gone by, Indestroy's vinyl can become your antique find. It will not enrich your life, but it gives you a short, widely unknown but sometimes entertaining insight into the history of the first thrash wave.