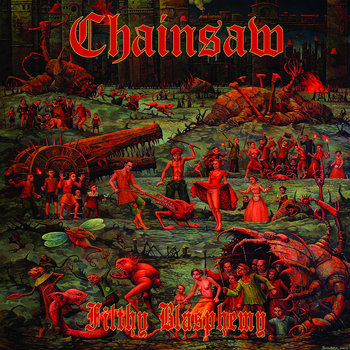 Bass guitar players are a pitiful species. They have only four strings, they are not allowed to play solos and many vile sound engineers forget to record their contributions when it comes to a new album. So, all in all, they do not see the bright side of life too many times, to say the least. But Witchkiller, the bass guitarist of the Greece wrecking crew called Chainsaw, has decided to be no part of this miserable game. Thus, the bass lines have gained a pretty prominent position on Filthy Blasphemy, the second album of the trio.

A trio? Indeed, already the number of musicians gives a first indication concerning the style of the compositions. Chainsaw feel comfortable in bad company and so they have a drink with Venom, Warfare, Motörhead, Blizzard and (early) Tank. Needless to say, that this meeting takes place in a very shabby bar with sticky tables and rancid girls behind the counter who have been quite sexy during the seventies of the last century (of course, Lemmy had them all). And it goes without saying that nobody here has ever heard of any kind of hygiene regulations and so Filthy Blasphemy lives up to its name with great ease.

Boozy, violent anthems like "Down in Vitriol", "Iron Casket" or the title track shape an album that does not lack power, malignancy and velocity. The riffing sounds fresh, the energy level leaves no wishes unfulfilled and no acoustic interludes disturb the constant aggression. Despite the "we don't give a f**k" attitude of the protagonists, the album does not suffer from a blurred production and both the precision and tight interplay of the band know how to please the ear. In terms of thrash, the Greece legions are still growing, and it does not matter whether we speak about the pure old school style or the blackened approach that Chainsaw celebrate. Of course, one can say that the group serves absolutely every stereotype of the hybrid genre with tracks such as "Judas Double Trader" and its anti-religious lyrics, but who cares? The fact that the artwork sucks is also more or less completely irrelevant. As long as we have the commitment that the music is what really counts, all these minor deficiencies are blown away by the absolute highlight "Under the Hammer of Gore". Its pinpoint riff, the rapid beats of the snare, the commanding deep voice of the lead singer and the raid-like background vocals of the chorus express pure dedication and sheer brutal fun. The real essence of blackened thrash comes to life, while other songs like "Hooves (at Your Door)" emphasize the rather sordid side of their music. These tunes draw the shorter straw in comparison with the more vehement pieces, but nobody must worry about big differences in terms of quality.

Did I already tell you that bass guitar players live a very interesting life (as long as they play metal)? They are part of a devastating horde, they know the value of teamwork and they spread their music all over the world. Sometimes they are even the descendants of people who made a huge contribution in the development of the European culture. Ask this guy called Witchkiller, if you don't believe me.