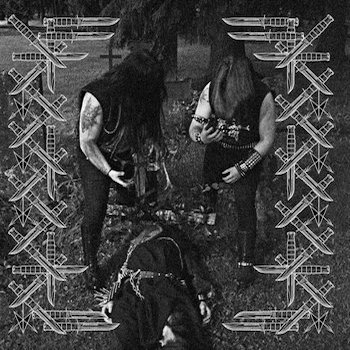 Morgal from Finland, another name I have never heard of before, describe their spiritual foundation in this way: 0% moral, 0% law, 100% f**k you. Well, f**k you were my first thought as well when I saw the idiotic, blatantly provocative band pictures. I have nothing against a strong image, but these dudes look like a parody of a black metal horde.

Nevertheless, it is nothing new that sometimes idiots are able to write good songs, just think of one or the other track on Rock'n Rolf's early Running Wild albums. Morgal's EP consists of four compact black metal outbursts. Some really great melody lines are integrated, the drummer does not shy away from blast beats and the nagging and screaming vocalist has understood that it makes sense to combine hysteria and dedication. The tracks do not lack energy and in spite of their furious approach, they never fall into complete chaos. Quite the opposite, the final piece surprises with a few calm sequences that increase the combative and slightly depressive mood of the music.

The guitar work reflects the spirit of black metal in a very natural way. It's not easy to describe, but it seems as if the music comes from the heart of the strange looking musicians, especially the cold riffs portray the essence of evil in musical form. On the one hand, this is typical Scandinavian black metal as we know it, on the other hand it is still exciting to listen to this kind of brutal eruptions. The climax is reached with "Mistress of Blood", a number which has everything that it needs to become a classic of the genre due to its flickering guitar, the ruthless hammering of the drums and the insanity of the lead singer. However, I prefer mistresses of flesh and blood, but that's probably irrelevant in this context.

A solid productions rounds the picture off. Well done, idiotic dudes. Honestly speaking, these 15 minutes whet the appetite for more music of Morgal. The promo speaks of "one of the best-kept secrets of the forever-fertile Finnish underground". If this is true, it might be that nobody listens voluntarily to a band with such shitty pictures. So, do yourself (and me) a favour and produce some new promo material. It would be sad if the band would fail to take the next step.