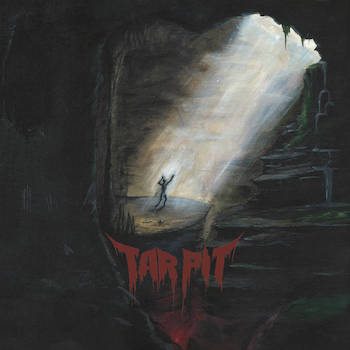 First of all, how did you even get down there?, now it's really gonna cost the state of Oregon to get you out, figure what went on, then secure that pit as to make sure no one succumbs to the fall; that's a long way down dammit and a lot of taxpayers money to be spent for rescue efforts. Seriously though, I love me some doom metal done right and this quintet from Portland knows what the fuck is up, or to be consistent, they know what's going down. Tar Pit drops a strenuous load of heavy hitting licks on their debut full length album Tomb of Doom. Let me be honest, I've been putting off listening to Tomb of Doom since back in 2018 when it was released for whatever reason, then only by chance it would reemerge as a request, and given I've been in the doom metal mood as of late, what better time to give this album a listen. And what of it thus far?, it has grown on me, each listen has proven to be more enjoyable than the last and I'm still having a blast umpteen spins later.

The descent begins with 'Rune' and let me just say as a warning; if you're not prepared to tap your feet and get those hips moving, then stay away from Tomb of Doom. This is not for rusty bones, and 'Rune' in particular packs a hell of an opening riff and the guitar soloing, ouch it fucking bites, it stings, it scorches dammit! A ten (10) minute, rear tearing, butt biting, hell of stoner doom metal tune to commence the ceremony. Oh but that's not all, do you like some rock and roll in your doom? then ''Sauin' has you covered (in Tar); gees these dudes kick ass at writing music, what a smooth change from crawling doom metal to mood lightening, up tempo, stoner rock. Almost like listening to an extension of 'Rune' the way the two songs intertwine despite the slight change in tempo and momentum. 'Rune' sounds heavy, all the while ominous while 'Sauin' takes a less darn n' dense approach though simultaneously adhering to a smooth transition in change of mood.

You'd meet face to face with 'Bruja' and realize with shock, Tomb of Doom is almost done; still the mental dance induced by the riffing of Stephen Hoffman and Brandon Martinez- (who plays bass in Coffin Rot, which explains those death metal riffs creeping around discreetly) won't give you a chance to catch your breath before the next waltz. In addition to the death metal nods, quite noticeable are the bluesy solos featured on 'Bruja' and self-titled track 'Tomb of Doom' giving the music a sort of softer, tranquil vibe if you'd refer to it as such. That in accordance with the careful drumming of Derek Johnson (who also plays in Coffin Rot) and vocals of Mat Ortega backed by Hayden Johnson's bass keeps the record moving without feeling forced. An overall team effort, seeing Tomb of Doom through from beginning to bitter end.

I would be lying if I said this was new or innovative, and if you have already heard the album, surely you would have picked up on some influences reeled such as Electric Wizard, a little Conan and even a tiny bit of Brimstone Coven. Yet the band appears to be crofting an image and sound of their own on Tomb of Doom and without any haste or rush they apply a diligent hand at doing so. Glad I took the time out to see what Tar Pit brought to the altar of doom, because they truly make you feel you're the person in that pit on the cover art.

Beneath the surface of mundane pleasures there is a behemoth lurking in the dark. Tar Pit has emerged from the depths of a bottomless cave to fulfill your need for Black Sabbath/Electric Wizard fuzz induced songs! Tar Pit is an American band hailing from Portland, Oregon that executes sludge/doom metal reminiscent of the bands mentioned above.

Thanks to Narcoleptica Productions and Careless Records I had the opportunity to drown myself into the thickness of Tar Pit's 2018 full length Tomb of Doom. It was a very enjoyable experience and let me tell you why folks. This band is located closer to the shores of sludge/doom rather than in the stoner side of the subgenre; the band focuses more in the occult side of the lyrics and concept leaving the psychedelic themes aside. You can tell that with track titles like 'Capra Nocturnus' and 'Bruja'. Thus, the production and songwriting tend to be darker and thicker; showing off very prominent, heavy and dense bass lines. The guitars are groovy and in songs like 'Tomb of Doom' are more bluesy, worshipping Iommi and the mighty Sabbath. The vocals tend to drown a little bit behind the sonic wall and that fact gives you a feeling of the singer being trapped in a cave, screaming for help.

Being the first offering from Tar Pit, I think, it is a very decent one; full of grooves, thick production and memorable riffs. Leaving room for improvement and further material, Tar Pit demonstrates projection in the American doom scene. I´m looking forward to listening more from the void of tar.