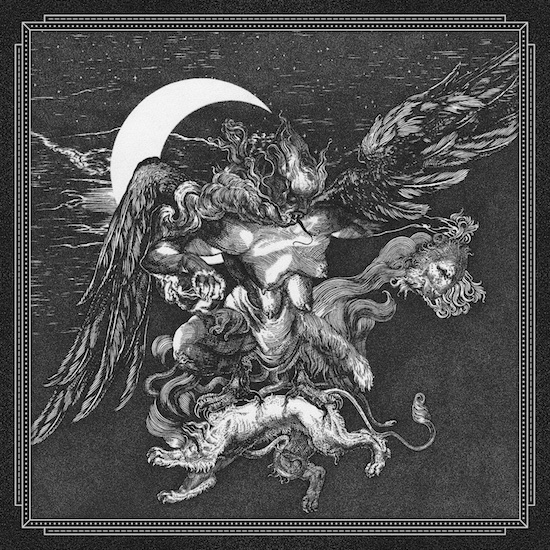 The Polish black metal scene has been revealed to the world, and deservedly so. So many great bands that brought a new voice and vision to black metal have made a name for themselves in the past decade and Deus Mortem is no exception.

Six years since their excellent debut the poles are back with an album that far surpasses their first opus in almost every way. Kosmocide is best described as brief but sweet, it's a perfectly balanced album with the right amount of meaty and lengthy tracks, much like their previous full length. The band gives you just enough to satisfy your black metal itches while also letting you want more in a good way. At 42 minutes the band successfully manages to do everything they want without resorting to filler tracks or weird experiments.

The music is as good as those in the know with Deus Mortem can expect, this album sounds simultaneously vintage and current without feeling disjointed, all the major hallmarks of classic true cult black metal are here, including a grim and gritty production in the best possible way. The main standout is the guitar work by founder and front man Necrosodom and second guitarist Sinister. The layered, dissonant and melodic wall of sound that Deus Mortem first displayed in their debut is in full display and stronger than ever, the album has a chaotic and melodious sound that is reminiscent of classic Norwegian albums like early Gorgoroth but with much more developed musicianship. Necrosodom and Sinister shine not just in the rhythm side but also in their demonic sounding riffs and soaring solos, the guitars like I mentioned before are the standout, there’s a nearly neoclassical approach to the solo work weaved within the now defined style of Deus Mortem. In many ways the album's guitar work reminds me of Metallica in their prime albeit filtered through black metal.

However while the guitars are the standout the rest of the band aren't slouching at all. The drums, bass and vocals also sell this album with style and panache, nothing is wasted, the bass is pulsing and subdued, serving as the song's spine that hold them together while the drumming is as fast and dynamic as any black metal faithful would want. Drummer Stormblast who did the unenviable task of replacing Inferno of Behemoth fame proofs in this album that he was a worthy replacement.

While this album is excellent and shows the infinite potential of Deus Mortem moving forward there's one criticism that I do have to mention and that is that while good this album plays it a bit by the numbers, it's a black metal album through and through and it is indeed the follow up to Emanations of the Black Light and as such there's a lot of familiar ground the band is still covering and no new direction. The cynical part of my brain would say "sure it's good but is really that different from their previous album and EPs?" and that can be a problem, especially for veteran black metal fans who are well versed in the ins and outs of black metal. At the moment for Deus Mortem this isn't a deal breaker but it is worth noting in terms of what may come for them as a band. We have seen many bands that keep the course in one direction with little detours end up becoming redundant in a genre that has often been criticized for not deviating from the norm, Deus Mortem as a fairly new band doesn’t have this problem and they certainly aren't completely devoid of innovation but it could hinder them in the future, but the future is as they say uncertain and in the present this album is a great display from a promising band of a very well acclaimed scene.

Deus Mortem is still a new player in the global black metal network, but already a force to be reckoned with as well. Darknessence was a first statement, Emanations of the Black Light a massive monument of totalitarian black metal and Demons of Matter and the Shells of the Dead showed the musical variety of the Polish horde impressively. Now they have forged the master plan and I hope that optically elegant Kosmocide does not focus on the proliferating black metal cosmos. But no cause for alarm, Deus Mortem destroy anything else, but not the style they master so well. Mastermind Necrosodom has written the whole music and I wish I had just five percent of his creativity. This album offers almost perfect black metal and it opens the gates for the listener to enter a dimension of total darkness, spiritual brutality and evil.

Many layers must be removed to get to the fiery core of the art of Deus Mortem. The songs reveal a high degree of grim complexity. Conventional song patterns, the good old verse-chorus-verse scheme, has no right of existence in this black galaxy. However, the complex structures are nor at the expense of coherence. It takes its time to decode the single songs, but honestly speaking, this process can cast a spell over the listener. One is drawn more and more into an album with raging guitar lines, perfectly integrated breaks, violent drums and an actually ordinary yet expressive voice. The song structures can be compared with those of "De Mysteriis Dom Sathanas" and the level of harshness is comparable as well. Of course, Necrosodom, who is also responsible for the vocals, does not present the pretty sacral approach which Attila celebrates every now and then. Picky people might say that the relatively uniform vocal approach can be seen as a tiny flaw. However, Deus Mortem have excessively drunken from the chalice of the pure black brew and the overall atmosphere of Kosmocide is just... well, how can I describe it? Perhaps this way: the album title does not promise too much. I am listening to a terrifying mix of misanthropy and vandalism which has the power to atomize its surrounding. A few number of silent parts is absolutely irrelevant in this context. To give but one example, the seemingly cautious beginning of "Ceremony of Reversion p. 2" rather increases the omnipresent uncomfortable feeling.

Yet it goes without saying that the full-length also houses many sections whose frenzy is impressive. Just check "The Destroyer". It lives up to its name and its most dynamic sequences inflame the pure fire of the sub-genre. No doubt, this is an immaculate closer that whets the appetite for more in view of its triumphant lines which remind me of the best moments of bands such as Setherial, while its rather mid-paced parts sound like Grand Magus being real men. I don't hesitate to call this piece a highlight, but it's tragic is that it does not stand out. Instead, it's a great pleasure to experience that each and every song achieves a fascinating level of quality. Of course, the simple yet effective chorus "Destroyer, destroyer, set the cosmos on fire, destroyer, destroyer, destroyer" belongs to the most impressive examples of a perfect black metal chorus and it formulates the idea behind the entire output concisely. Moreover, the calm after the storm at the end of the song appears as an unexpected act of clemency, but to me it rather seems like the transition to eternal nothingness after the final explosion. The cosmos is killed, Deus Mortem have reached their aim. Thus, I am all the happier that they lead us through more than 42 minutes of apocalyptic art. The quartet even shows us "The Soul of the Worlds" and we discover abysmal depths, brutal destruction, ominous drum rolls and atmospheric background vocals. True black metal liaises with perfection and we are witness to this great moment.

The rumbling production lacks a bit clarity. No doubt, nobody needs an album of the here presented style that tries to win with a polished, sterile high-gloss-sound. Terratur Possessions yes, Nuclear Blast no. Nevertheless, the mix sounds minimally blurred, but who cares as long as this remains the only minor flaw. Deus Mortem have written an album that surpasses its predecessor with great ease and this was anything but a matter of course. "Sinister Lava" with its mix of meditative and unleashed elements will convince you, if you don't believe me - and any other song can do the same. It is therefore all the more idiotic that the so-called "Antifa" forced club owners in Berlin and Munich to cancel the concerts of Deus Mortem (and Mgla). You self-proclaimed censors want to fight against fascism in Germany? You're a little bit too late and those resistance fighters who really had to fear for their lives - and who lost it in many cases - deserve our respect. Anyway, the negative energy of the modern Antifa is nothing against the gargantuan destructiveness which is shown on Kosmocide.