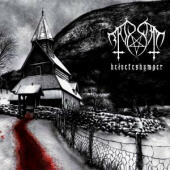 Although fairly new to the black metal world, Blodsrit show some potential on their latest album, Helveteshymner. The band, beginning in 1998, has released four recordings to date. With each release we’ve seen Blodsrit’s sound slowly evolve into what many black metaller’s would call the ‘Darkthrone sound.’

While Helveteshymner is a very solid black metal album, it does not test any new waters nor does it try to do anything beyond what Darkthrone has been doing for the last couple decades. The guitars aren’t particularly outstanding, not straying from the style pioneered by Nocturno Cultus of Darkthrone and Euronymous of Mayhem. Moreover, the drums don’t do much to compliment the guitars. Rather, they act as a background instrument, as one would expect in generic black metal. The bass is almost inaudible, and the vocals are fairly traditional.

On the other hand, the production of the album is quite interesting. Produced by Mieszko Talarczyk, the vocalist and guitarist of the Swedish grindcore act Nasum (who has been missing since the 2005 tsunami), Helveteshymner has a traditional black metal sound with some modernized tweaks in it. Rather then having a poor quality recording as one might expect from a traditional black metal band, Helveteshymner is distinctively rough sounding, though clear enough for one to hear the guitars, drums and vocals very well. In a way, the production fits the bands philosophy - to take traditional black metal and give it a modernized sound.

If you’re a fan of traditional black metal, you will really enjoy this album. If you’re into more black thrash style black metal acts like Immortal, symphonic black metal like Dimmu Borgir, or are just getting into black metal, this album is not particularly inviting or easy to get into.