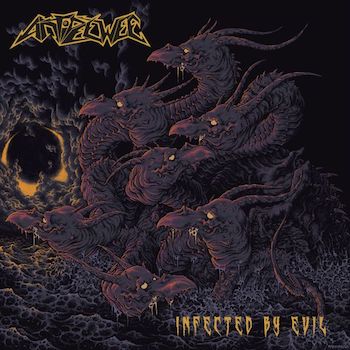 Antipeewee? Eh, what? I stumbled over this band by accident. At first glance, I did not know whether this was really a metal group or not. Their name sounds like a pill against serious health problems in the genital area or like another oh-so-funny skate-punk-shorts-kiss-my-ass formation that prays to its bandana-ornamented Mike Muir altar every day and night. This Charming Man, the label of Antipeewee, also does not exclusively focus on metal and so my skepticism grew even more. But due to whatever reason, I decided to order Infected by Evil and lo and behold, its mighty production does not lack pressure and the music itself takes quickly possession of the listener. Forget the nonsensical band name, this is a truly good album. Even better, it grows with every new spin and a lovely girl plays guitar. She is not involved in the song-writing, so I think there should be a time slot for a candlelight dinner with Felix 1666? No? Okay, then I go on writing this review. But don't expect a high rating under these circumstances!

On a more serious note (I am German, I hate humor), Antipeewee have power, enthusiasm and original ideas. The fourth track, for instance, surprises with a violin solo. Is Martin Walkyier or someone else from Skyclad in the house? However, this always slightly weird sounding instrument adds a spooky touch and blends seamlessly with the vehement foundation of the almost blast beats driven "Symphony of Doom". Don't be fooled by the slightly irritating title - this number has nothing in common with the ponderous critters of the doom genre. Antipeewee like to give full speed ahead, but they also do not shy away from rather atmospheric mid-tempo sequences, for example at the beginning of "Dreams in the Witchhouse". The mix of different tempos meets a mix of rather melodic passages and those sections where they swing the hammers without taking any losses into consideration. Indeed, the girl (still no time for me?) and the guys form a kind of consensus thrash, but they do it in a natural way without having only commercial intentions in mind. The songwriter duo - the vocalist and the man at the bass, both guitarists seem to come from a sloth, the drummer is (as always) excused - just has a lot of good ideas and they connect them cleverly with the effect that all tracks have a very remarkable substance. Every now and then some Maiden harmonies call from the distance or a tinge of melancholy is in the air, but mostly the thrashing axes dominates. Finally, some hardcore-influenced vocals are also integrated. This cocktail ensures a coherent and homogeneous overall picture.

Antipeewee spread the vibes of former German underground thrashers such as Backwater or Assorted Heap, but their musical potential is definitely bigger. It is therefore only logical that the album does not lack highlights. Tracks like the pretty brutal and dark "Obey, Consume and Die", number nine of the song list, provide evidence that the band does not run out of breath. Slayer-like riffing meets a catchy chorus which is supported by dynamic background vocals. The title track also holds jagged riffs that create a profound depth at the beginning, but here the quite casual background vocals add an almost punk-like "oh-oh-oh" line in the chorus. The number does not flirt with Bad Religion, definitely not, but it shows that Antipeewee are able to unite different approaches without creating a fragmented album. Infected by Evil works as whole. Free from any kind of fillers, the almost 48 minutes provide very good entertainment. With the exception of my candlelight dinner, nothing is missing. But I am sure that time is on my side - and on Antipeewee's side as well. Such a down-to-earth yet dexterous band should be able to play a good part in the future evolution of (Teutonic) thrash metal. Only the very rare flaws like the inappropriate light guitar line in the actually very vigorous "Buried (No Way Out)" or the somewhat needless intro should be erased quickly. So be anti, be pro or just be peewee, but check out this inspired and contagious full-length.