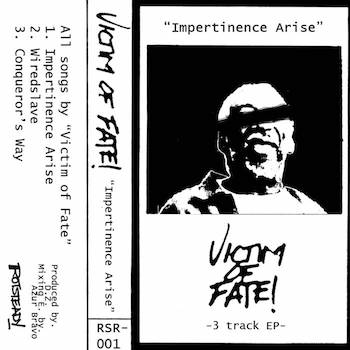 Whenever my grandma (R.I.P.) heard that a young lady had become unintentionally pregnant, she smiled knowingly and said: "Nature always finds its way." That's true, but I like to add: whenever I hear rasping, sometimes galloping guitars, a rushing snare and more or less raw vocals, I smile contently, think of my grandma and say: "Speed metal always finds its way". In the case of Victim of Fate, this way has led to another continent. The dudes hail from Mexico and do what all newcomers (should) do: they play the music they like and due to the fact that they act very tightly, this demo does not sound amateurish in any way. Even the production does not originate from a dusty cellar. Of course, I don't listen to a professional sound, but it would be unfair to set the bar too high. The three tracks are presented with a more or less proper amount of pressure and the guitars dominate without marginalizing the contributions of bass, drums and vocals. And so, coming back to my grandma, the band can be proud of its first baby.

Victim of Fate have a good grasp of compact compositions and maybe the solid riffs that carry the songs are just the harbinger of something greater. Speculations aside, the riffs guarantee a more than acceptable level and especially "Wiredslave" has a raw, aggressive touch that fits the musical approach very well. Furthermore, its solo hits the mark - no doubt, the guitar work marks the greatest asset of the band. The vocals leave room for optimization, because they just accompany the six strings without leaving their own aroma. But this is not to say that they reveal major deficiencies. Better still, the entire demo is free from serious flaws. I don't know how much time it took to record the songs in this form, but the result is convincing.

Frankly speaking, this material whets the appetite for more and I hope that Victim of Fate don't get lazy. Maybe they can convince 50% of the citizens of Mexico City to buy this demo - this should be motivation enough to go on. But jokes aside, even if this is not possible, they can count on the support of the underground metal maniacs worldwide. Victim of Fate will not unhinge the world, but they deliver three songs that reflect the unbroken fascination of speed metal. And, as mentioned above, speed metal always finds its way. Ask your grandma, if you don't believe it.