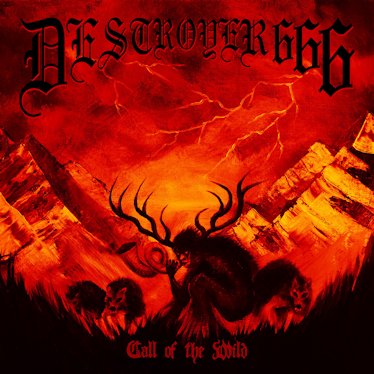 Deströyer 666 return with Call of the Wild exactly two years after their last full-length. Maybe due to this relatively short period, the guys do not surprise with a new approach. All songs spread the vibes of the material of Wildfire. The Australians have found their identity. No supporter will be disappointed.

Especially two tracks enrich the growing catalogue of D666. But "Violence Is Golden" is not among these songs. To be honest, it is a heavily stomping opener with solid riffs and a hard-working double bass, nevertheless, I thought that the dudes have another definition of violence. The mid-paced song holds some trademarks of the combat unit, for example the screaming solo guitars or the commanding voice of the artist formerly known as Warslut, but it lacks the extra portion aggression and belligerence. However, another thing is becoming clear in a matter of seconds. Call of the Wild belongs to the lucky outputs whose material is equipped with a powerful, clear and bullying sound. It fits the musical approach very well, thumbs up in this respect.

The highlights of Call of the Wild are the title track and "Stone by Stone". They combine high speed sections with triumphant mid-tempo parts and score with the combination of intensity, vehemence and a certain insanity. "Stone by Stone" is the more brutal number, but the guitars of the title track shoot some poisoned arrows as well. Its fast sections sound brilliant. The more anthemic chorus marks the less strong part, but it does not kill the power of the vehement song. The "ohoho" background choirs remind me a little bit of rather dubious Viking metal experts, however, the overall quality of the song is doubtlessly okay, to say the least. The closer "Trialed by Fire" seems to be a fixed component of their EPs. It had been already released on Terror Abraxas and frankly speaking, one version of this acceptable song would have been enough. But nobody asked for my opinion in advance... Be that as it may, it adds a more or less dark and desperate element.

Of course, the music is the most important thing, but D666 score with another relevant element as well. Their music breathes the spirit of rebellion, freedom and independence. They convey these emotions very credibly and while doing so, they reflect the real essence of metal. This is one of the reasons why I eagerly await their next full-length.