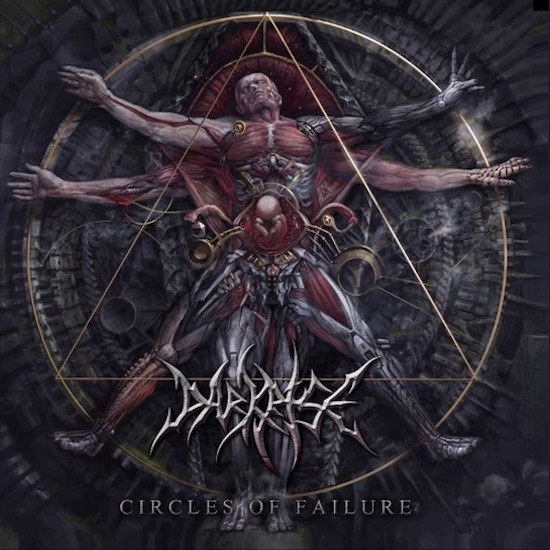 DarkRise’s Circles of Failure is loaded with political and societal themes with an eye and tongue aimed at the many problems existing within the world from the band's perspective. This is modern death/thrash metal that's marked by a crisp production, one that I'm not quite fond of. However, the music is good and would be a worthy recommendation for fans of this particular genre.

As mentioned, the musicianship is of a decent standard, lots of blast beats, thrashing, clean riffs and solos, vocals sound, 'ok' and the topics have weight as they are candidly discussed. From the first track "Liar Liar" to the last, "Bullshit Theories", you'll notice that the music is always 'in your face', hence the aggressive drumming and mean vocal tones used to express disdain and dissatisfaction rarely every let-up. Accompanying them is the guitar work that is the highlight for me. Taking nothing away from the other aspects of the music, but it's the riffs that make each song memorable and worth a repeated listen or two depending on your taste. Opening with "Liar, Liar", the riffing makes its presence known in a dominating performance that sounds good enough to touch ground with old school death metal. The leads and solos run all the way down to "Bullshit Theories" which is the best track on Circles of Failure.

Though not a fan of modern sounding death metal, I can appreciate what's offered compared to multiple other efforts released by big record labels. It tops a lot of what I’ve encountered from major labels; as stuff generally put out by such usually fall well below my threshold of a decent ranking, while Circles of Failure qualifies as a passable entry from DarkRise. I'm aware the band has material going all the way back to 2001 with this being their 6th full-length output, thus the level of musicianship showcased doesn't come as a surprise to me.

Once you've heard the first track on Circles of Failure you have a clear idea of what the rest of the music has in store. And even with the riffs being of a high standard, the straightforward approach taken by DarkRise doesn't really help them in the variation department. In addition to that, most songs on here last for more than 4 minutes in so stagnating the music a bit. Around 32 minutes or so would have been ideal but prolonging the experience with 42 minutes of fast paced drumming and riffing washed away the flavor of the album to some extent.

The standout tracks (for me) would be "Old Assholes", "Lobotomized" and "Bullshit Theories". They are more enjoyable compositions than others on here due to the way they are structured. Circles of Failure is a good record by my judgement and would sit relatively high with someone else who likes this style of metal more than I do.