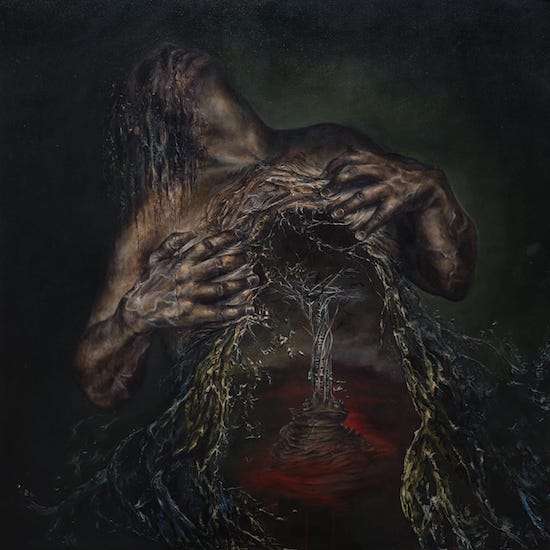 These days new bands are popping out like pimples on a teenager and today new mysterious creature called Scythe Lore presents debut EP, with ambitious title Through the Mausoleums of Man. As far as I know our German trio doesn't have any previous releases, no social media presence and members' identities are also a secret. What we do know is that we deal with new incarnation of '90s death metal or dark death metal as labeled by Iron Bonehead.

First thing that stands out, before you even hear the opening notes is interesting, not your typical skulls, zombies and rotten intestines cover, not that there's anything wrong with that but original and thought-provoking imagery sets higher expectations and gets my juices flowing a little faster. After unexpected intro in 'Eschatology Speaks All Tongues' in which I found myself checking speaker cable connections and multiple times adjusting the volume I was hit with good old sound of Swedish death metal. Should there finally be a rule forbidding the use of HM pedals for new bands? No? OK, moving on... So, there I saw my expectations leaving through the office window but don't fear, it's not all lost because after typical fast, blast beat, fast first half of the song we suddenly slowed down to crawling levels of doom and got treated by very spacious and atmospheric guitar leads. Those gloomy and wretched sections are present in all tracks except 'Jhator' and 'Absonus' and introduce a welcome change to the typical old school pace and in my opinion are the strongest points of this EP. Even vocals have more interesting tone and depth when overlay majestic darkness of the middle section in 'Behind 7 Walls and 7 Gates'.

I'm not sure what was the idea behind +/- 100 second songs 'Jhator' and 'Absonus'. I found them as the weakest moments of the record with pretty straight forward riffs and without crushing weight usually associated with short outburst of death metal energy. They felt like space fillers and those have no place in a debut recording. Reminding tracks show more maturity, better songwriting and even show hints of built up dread atmosphere.

So, all in all Scythe Lore debut EP Through the Mausoleums of Man is a solid introduction to the metal world with hidden potentials that if carefully nurtured might provide a solid backbone for future full-length.

A new German curse lingers over the heads of mankind, this time in what seems to be a body of unholy death metal, Scythe Lore ascends to reap the harvest with Through the Mausoleums of Man. Cavernous growls own the platform on this one. Yes, the riffs are here, the drumming is too, but unholy hell, the vocals sound like one hungry and angry tyrant. From the instance I saw this was an Iron Bonehead release I immediately knew that it was going to be nothing, but gut-tearing mayhem and I was right. From the first to final track, prepare for a terrifying touch of commotion. This German unholy order brings the noise in blazing, mid-temped and doomy passages. Just a taste of what I’m optimistic is to come in the near future should Scythe Lore decide to play into the hands of gold.

From the opening snap of “Eschatology Speaks All Tongues” to the grotesquely themed “Within Our Rotten Flesh”, Scythe Lore unceremoniously rains down a storm of cavernous vocals aided by the momentum shifting drumming and wound salting guitars. Utilizing various tempos, Scythe Lore manage to craft a short offering that reeks of apocalyptic barbarity sonically with significant musical detail and effort being put into the quality of Through the Mausoleums of Man. Some bands release a short record that displays cursory attributes that in turn tell of their deficient dedication to the art if any at all; however, with Scythe Lore, it’s easy to see that there is musical mindfulness inculcated on Through the Mausoleums of Man. As someone who enjoys the cavernous vocal delivery, hearing it swirl around in so much atmosphere ushered in by the guitars was indeed a testament to an understanding of the craft. To many Through the Mausoleums of Man is a headache (good!), to me it’s a mark of musical beauty and more importantly, conscientiousness. Spanning only 19 minutes, yet it feels like a complete piece of work in a sense of telling one particular section of a tale; not many bands can accomplish such.

The performance of Scythe Lore on Through the Mausoleums of Man is nothing short of electrifying; by means of dispersing multiple tones as heard throughout the record particularly on “Behind 7 Walls and 7 Gates”, “Established Death” and “Within Our Rotting Flesh,” a feeling of perpetual creation and destruction is conjured and delivered in a powerbomb of soundscapes. Both melody and mayhem play roles in the building of this towering display of aggression and disintegration; as the vocals sit triumphantly in governing the truculence with aid from the drumming; the guitars usher in the many atmospheric inflections that are then washed by more waves of vocal pugnacity. The music is all together commendable, no restrictions are placed on the ferocity of the blaring yet moody guitars (at times), and though the drumming has its moments, it’s still the vocals that instill the berserking nature of Through the Mausoleums of Man. They are delivered in such an overwhelmingly loud manner that the listener/s attention is apprehended with force that is sustained and maintained for the record’s entirety. Everything about Through the Mausoleums of Man encompasses death metal gold, from the evil artwork to the overwhelmingly hostile yet capricious (at times) temperament, one can only imagine the impact Scythe Lore will have once the record sets foot in the underground.