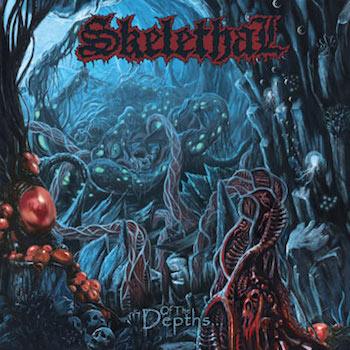 I cannot stop listening to this band/album! It reminds me a lot of early Entombed, Dismember and Fleshcrawl. Be that there are only two members in this act, they do a darn good job of supplying you of torturous, raw death metal. You'll most aptly be into them if you are a fan of old Swedish/German death metal bands. They have devised resoundingly excellent riffs packed with solid lead guitar work. I'm not sure why they have so few reviews out there and the existing ones are rating it in midrange. They deserve a much better numbers that reflect some original sounds/riffs.

This CD was sitting in one of my piles that haven't been listened to in quite some time (if at all). I'm glad I was able to give them a fair shake after pulling the disc out of the pack. The production is sort of raw, but you can still hear everything and not so raw that you get a swift turnoff for not giving the music justice. The music/vocals are my favorite parts to this album. The tempos aren't blazingly fast, but fast enough to put them in the death metal genre. I would NOT classify them as death/black metal as was shown when I first Googled the band after hearing the album. They certainly are just death metal.

What pounds in your head when you hear this album is the guitar. I guess I'm biased though since I was a guitarist previously for many years and what I notice first in bands is the guitar work. There isn’t a great deal of leads, but one’s that are, kick ass. I think the strongest part here is the guitar work. But the vocals are pretty cool too. The music is really catchy, and they certainly have come from those old roots, but they've weaved their own sound into it. A band to discover in your collection that totally kicks ass. I did get the digital release along with the CD.

Wrapping up, if you're looking for something to blow your hair back, Of the Depths... is for you! There's a cool Dismember cover on here that they threw in to reflect on maybe their idol(s) as well. Not sure if the lyrical content is to my liking but I don't really pay attention to it, though the vocals are good. If you're looking for that sweet Swedish death metal sound, this album will be to your liking. I will continue to support this band and their music probably if they continue writing. This release is a little outdated (2017) so hope new stuff is in the works, if it isn't already. Show the band support by buying the physical copy! They shred!