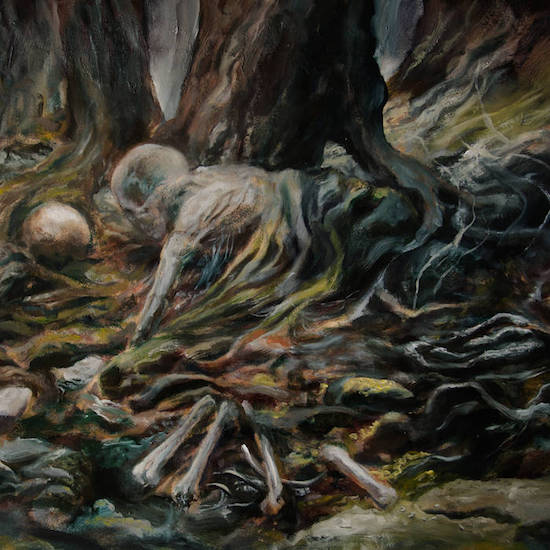 One of the best death/doom metal bands returns with an album itching to swallow all hemispheres encountered. Since the inception of Krypts with Unending Degradation followed by the explosive Remnants of Expansion the unit has always seemed better than what was gifted.

Hence, Cadaver Circulation is in every way superior to all of the band's prior efforts, the atmosphere is deeper, the sound is heavier, and the movement is more fluid. Krypts have surpassed their 2016 output significantly. What made the previous record, Remnants of Expansion so special to me, is the looming presence of the bass-lines, the creepy riffs and the powerful voice of Antti Kotiranta. The material on that record was terrific, however, even then I knew Krypts could execute better. That ‘better’ can be heard on Cadaver Circulation in every aspect, they took all the great highlights of their previous effort and improved it whilst adding a new facet. The songs feel more as extensions of each other, hence the structure of the rhythms, riffs and timing of the tempos rising and dropping exceed the way they were implemented on past albums.

Krypts wraps the listener in with “Sinking Transient Waters”; you’re immediately struck by the rich bass and heavy inflection of the musical notes. The track is a rather fiery start to the record but makes room for slower tempo rhythms. Also coming to rise is a greater emphasis on song structure that echoes sharp and fluent transitions; whereby the album sits sturdy in unification but still redeems an air of contrast. Topped with an atmosphere that triggers so many emotions, Krypts goes even deeper into the psyche of the listener by igniting and invoking sadness as heard on “Echoes Emanate Forms”, which reflects a sudden dip into the sea of melancholy to take a swing at the listener/s thoughts. This entry possesses the most precipitating and elegantly infused new aspect to Krypts’ music. The build to the inception of that desolating and chaotic section is a profound piece of instrumentation on Cadaver Circulation, as it ties into the artwork and themes I think are being expressed.

Cadaver Circulation seems like a tributary effort in some ways, some song titles indicate this notion, as though the band is playing to honor someone or something. Though still heavy (and heavier than anything in their discography), a rub of sentiment protracts the record. I can’t tell if this was intentional or not, but it is certainly the feeling presented with at the first listen and it still has not changed after so many consecutive repetitions. The feeling of emptiness and perpetual wandering is manufactured in higher degrees even when carrying onto songs such as “Vanishing” and “Circling the Between”; In doing so Cadaver Circulation is definitely a profound step in a more meditative direction, this time diving to greater depths in search of understanding and sapience. The despondent element is being introduced tenuously but conspicuous enough to be identified, yet, it’s groomed by a ruinous totem ominously revolving the record. Cadaver Circulation still has all the familiarities of Krypts but is decorated with an even more detailed production than on Remnants of Expansion; hence the vocals of Antti project a more insistent, gobbling, echoing compass of ferocity, while the drumming of Otso expeditiously flows in accordance with the seasoned strings of Ville Snicker and Jukka Aho (Gorephilia), R.I.P Henri Kuula (Nemesis). Perhaps the swing towards a grieving sound was a reference to that loss.

Cadaver Circulation is the best output by Krypts, but again, I still think they have the capacity to generate an entity which would eclipse this effort.