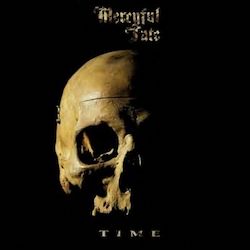 It must have been a strange feeling to have been part of Mercyful Fate after the reunion. Because one thing no one should have doubted: no matter what the five musicians would produce, the two larger-than-life monuments Melissa and Don't Break The Oath would outshine it. More or less complexity, more or less falsetto, more or less harshness - none of it would matter in comparison. At the latest, the break-up after the second album and the following almost ten-year break put the early works into an unattainable dimension.

But well, the family needs money and it's not like the Danish unit had dried up creatively. So the King and his buddies opened the race for third place in their discography. In the Shadows had been very good, but Time took it up a notch. At the beginning of the album, the highlights pile up. The partly oriental but nevertheless heavy 'The Mad Arab' is the best piece in the opening quintet. The King offers his whole spectrum and especially the somewhat haunting "ahaha ahaha" screams are a strong detail of this mid-tempo stomper. Every note is spot on here. Mercyful Fate once again create an eerily menacing atmosphere and surprise with an unexpected keyboard-dominated outro. Yet 'The Mad Arab' also shows the dilemma of the band. Mercyful Fate had us already told about the 'Curse of the Pharaohs' and they had taken us to 'Egypt'. Despite the undeniable class of the then new compositions, you couldn't help feeling for long stretches that Mercyful Fate were stuck in the prison of their own experiences and successes. The early works had been something musically great and they had been something almost completely new or, at least, very rare. But back in 1994, this situation had totally changed.

In view of the changed surrounding, it was left to the title track to actually show another new facet. 'Time' (the song) has a very untypical, largely gentle approach and tends almost more towards chamber music than metal. But it is precisely the soft appearance that leads to an unsettling contrast, because the lyrics make everyone aware of the unrelenting inevitability of one's own transience. In addition, the King shines here again with whispers, vocal lines and, surprise, empathy. Moreover, I like the not spectacular but very impressive build-up of the piece, which gains more and more intensity before imploding on the last metres.

After that, there is again good-class, hard standard material to be heard, which, however, does not come close to the first five tracks. 'Castillo des Mortes' adds its own touch at the end while inviting the listener to a spooky place “somewhere in ancient Spain”. It’s the most progressive track of the album and a worthy closer, even though a few breaks lead to almost Maiden-like guitar sequences. Either way, Time is a very recommendable album. No song flops, the band stays true to their roots and the production convinces with clarity and power. But the truth is that Time shares the fate of all albums by the Danes from In the Shadows to 9. Despite many ghostly (vocal) melodies and varied arrangements, there is nothing to be felt here, far and wide, of the overpowering occult force of the classics, their spiritual cruelty and their Luciferian omnipotence. Anyone who can block this out should appreciate Time wholeheartedly.