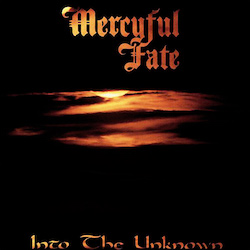 It is not fair: After their reunion, Mercyful Fate could do whatever they wanted. Nobody dared to put one of their later albums on a par with “Melissa” or “Don’t Break the Oath”. This was not allowed, because it would have meant nothing else than that the heretical critic would not have recognized the greatness of the early works. Too stupid, that guy!

Therefore Mercyful Fate were stuck between a rock and a hard place, especially in terms of the lyrics. Either they picked up new topics (how dare they?) or they returned to the tried and tested subjects (no new ideas!). They had started their comeback period with “Egypt” and now we had to the listen to the (sound of the demon) bell again. Uninvited guests, a kind of collective term for all creatures who had already appeared in their lyrics, returned and so there can be no doubt that “Into the Unknown” wants to be a typical Fate album, although its romantic artwork may suggest something different.

The progressive musical approach of the title track seems to have the intention to build a bridge to “Satan’s Fall”, but you cannot produce a bridge into your own past. I don’t say that the song is going nowhere, but it cannot hold a candle to the eleven-minutes-monument of the debut. On the other hand, there are more straight tracks here to find as well – and some of them are really strong. The lively “The Uninvited Guest” has a very good drive and does not lack an element of spooky malignancy and the consistent “The Ghost of Change” with some pretty strict lines and the great melody at the end also leaves its mark. But unlike former times, the guys are not immune against failures. For example, the chorus of “Holy Water” is completely ridiculous in view of its harmlessness and the vocal intro of “Deadtime” reveals a non-convincing facet of King’s voice. Broad parts of the album’s second half do not fulfil the (high) expectations. A song like the rather one-dimensional “Under the Spell” is okay, really not bad, but also almost banal for a band that has penned tracks like “Nightmare”, “Into the Coven” or “Don’t Break the Oath”.

At the end of the full-length, it’s nice to meet the mad Arab in the eerie closer again and when it comes to the big picture, there can be no serious doubt that “Into the Unknown” houses much more positive than negative aspects. The compositions are meticulously designed and arranged, both the smooth and the abrupt breaks usually work and the level of vehemence leaves nothing to be desired. Additionally, the clean but not sterile production lends the material a proper presentation, even though the occult note of the two early classics is almost totally missing. All this leads to the realization that “Into the Unknown” is a good, but no essential release of the Danish five-piece and we see that even or especially legends can break on their own reputation.