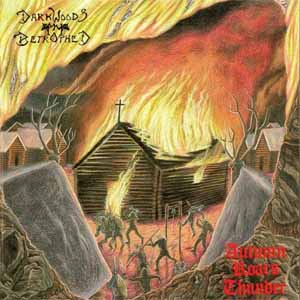 Type: Full-Length
Release Date: June 3rd, 1996
Label: Solistitium Records
Genre: Black
1 Autumn Roars Thunder
2 Nightowl
3 When Ancient Spirits Battled
4 The Conspiracy Of The Pagan Cult
5 Hymn Of The Darkwoods
6 On The Top Of The Falconhill
7 King's Gray Shadow
8 I Burn At The Stake
9 Red Sky Over The Land Of Fells
MetalBite on YouTube

Autumn Roars Thunder is a difficult album for all those who enjoyed Heirs of the Northstar. The centerfold of its booklet shows a very atmospheric picture of a Northern landscape and the music focuses, compared with that of the debut, also on atmosphere. The strict and icy approach of the thunderous predecessor does no longer exist. The elegiac title track rolls in slowly, the vocals lack bitterness, malignancy and coldness and a very calm spoken words part marks a really weak sequence of the eleven-minutes-monument. All in all, this opener can be understood as an experiment with some good melodies, but it also holds crude elements.

After such a statement at the beginning, the band has to accept that the faster tracks on the album appear somewhat half-hearted. It gets obvious that the dudes are heading for new shores and they do it in a competent manner, but I guess I would not have bought the album back in the last millennium if I had known some tracks in advance. Even songs that break loose in a pretty hysteric manner, for example "The Conspiracy of the Pagan Cult", confront the listener with breaks that kill some percent of the strength of these tracks. Nevertheless, it feels great to hear the insane screaming of the lead singer on these songs and to experience the straight hammering of the drums. One can discuss about the relatively great influence of the keyboards during some parts of the songs, but fortunately the cold fury of the fastest sections turns out to be their characterizing feature. On the other hand, Viking-inspired mid-tempo tracks such as "Hymn of the Darkwood" are simply too long, to say the least. The song structure is neither adventurous nor unpredictable and the female background vocals coalesce with the strange, wannabe-heroic male lead vocals to a relatively inedible cocktail. I admit that the slower songs have a handful of good riffs, but from time to time they disappear behind the keyboards, the lead and background vocals instead of claiming a leading role.

For fans of harsh, merciless black metal, the album is like a rollercoaster with countless ups and downs. In its feeble moments, the album sounds like a collection of leftovers that Ancient never dared to release. The lead vocalist is no natural born vocal talent, although he seems to be exactly of this opinion. No doubt, he made a good job on the debut, but here he fails. An aggravating factor to be taken into account is that almost dreamful breaks appear occasionally and make me think of finishing this review prematurely. But it goes without saying that this would be inacceptable and, honestly speaking, the narrow-minded, typical Northern black metal sequences are still fascinating ("I Burn at the Stake", "On the Top of the Falcon Hill"). These eruptions of primordial force help the full-length to keep its head above water. That said, it can be recommended with restrictions. Its production avoids severe shortcomings, but naturally it cannot make up for the reduced power of the compositions. So, decide for yourself whether or not you like to check a pretty heterogeneous work of an actually talented group. Just do not expect a ferocious masterpiece like the debut.