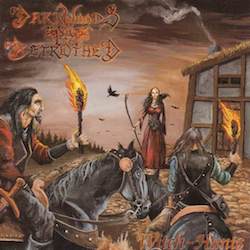 Type: Full-Length
Release Date: 1998
Label: Spinefarm Records
Genre: Black
1 Without Ceremony And Bell Toll
2 Inside The Circle Of Stones
3 The Crow And Warrior
4 Dying To Meet You
5 The Preacher Came To Town
6 Burn, Witches, Burn
7 Witch Hunters
MetalBite on YouTube

If one wants to travel from Norway to Finland, she or he has to cross the beautiful land of Pippi Longstocking, but the way from Dimmu Borgir to Darkwoods My Betrothed is shorter, not only with respect to the alphabet. Despite a few explosive blast beats driven outbursts, the Finnish group cannot completely deny its influence. The aesthetics and vibrations of the often-used keyboards definitely sent greetings to Shagrath and the rest of his gang, in particular in songs like 'The Crow and Warrior', where the keys want to set dramatic impulses by brief, alarming synthetic staccatos. I don’t want to say that the band floated with the tide, but it seems that DMB were on an endless journey in order to find their preferred style. Their debut presented ice-cold, predominantly mega-fast black metal with insane, high-pitched vocals, the second album was heavily influenced by melancholic emotions and here we have aggressive, then modern black metal with pretty complex yet accessible song patterns. If they had released these albums under different names, probably nobody would have found a connection between them. This inner restlessness has an impact on songs like the opener. It suffers from its heterogeneity and its single parts do not build a coherent overall picture.

And let the truth be told, it’s not only the opener which fails to convince with stirring melodies. Witch-Hunts is characterized by a lot of acceptable, but not very exciting parts. There is a pretty black atmosphere and a more than solid degree of musicianship, but all in all, the farewell album of DMB is rather an enlargement than an enrichment of the worldwide black metal production. By the way, what about the production? It does not meet my expectation in view of the dominance of the keyboards. The guitars do not have a formative influence and the vocals must struggle in order to be heard. A veil of mist lies over the entire mix, it slightly lacks transparency. Especially the nuances of the drumming drown in the sea of keyboard sounds. I don’t say that the mix sucks, by far not. Yet it is also not flawless and so it matches the quality of the song material in an astonishing manner. And so, I return to the compositions. DMB present a little highlight, the comparatively straight and strict 'Burn, Witch, Burn'. Its fast parts score with dynamic, the mid-paced sequences meander without suffering from a massive quality loss. However, one song cannot make up for the deficiencies of the remaining material.

In hindsight, DMB’s departure was a logical step, because their discography lacked vision and, I am sorry to say that, authenticity. It does not make much sense to offer almost more styles than albums. No doubt, they never released a really weak full-length, but in a world with 10.000 competitors, they did not have the features it needs to be a step ahead of the pack. Friends of mid-harsh, slightly pompous black metal can check this work, but from my point of view, everybody who wants to get in touch with the restless formation from Suomi should prefer their pretty raging debut. By the way, Pippi Longstocking’s restlessness is more enjoyable.