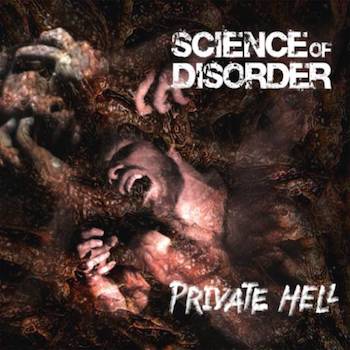 It doesn't happen very often that I get to see the band live first and then listen to the studio album to write a review. Last time it happened to me over 6 years ago, when I went to see Dyscarnate playing before Aeon from Sweden. Fantastic show and their stage performance definitely encouraged me to listen to their album. Same thing happened in this case, I got to see Science of Disorder performing live before I decided to sit down and take a closer look at their latest, second full-length, Private Hell. First of all, the title is perfect and sums up the main theme throughout album lyrically. Jérôme Thomas provides really good screams, which sound even more intense live, he's using more of his screaming than singing skills live and it even enhances the overall atmosphere of frustration and hopelessness and anger, the main emotions expressed in the lyrics.

The sound of the guitars is quite unusual, very dry, crunchy, which sounds good both on the album and live in my opinion. And from the second track "Kingdom Comes" you can probably see how good drummer Baptiste Maier is. Thanks to his very good base drums work the rhythm section is in a kind of contrast to rawness of guitar sound - it's rich, there are many complex rhythms and he's filling all the gaps that are left by rough (but in a good way) riffs, quite often played only on one string. Most of the solos are played by Stéphane Grand, but Lord Pelthor also tends to put some melody lines showing that probably he's more inspired by death metal.

And that brings me to say few words about the style, because it's not that very easy to describe. It definitely has death metal in it. Encyclopaedia Metallum mentions metalcore and I agree, some elements from metalcore can be heard here. But also, you can hear some Celtic Frost inspiration as well as some elements reminding punk rock. The only thing that was actually missing on live show was the sound of distorted bass played by Thierry Pinard. It sounds very good on the album though and provides that "meaty" element, giving the album heavier weight.

The overall character of this album is very energetic, but it provides some variation, from punk-sounding "Choke" or some punk elements in "Sickness", reminding me of Celtic Frost "Light Bearer" and almost purely death metal in "Mine" or some death metal elements in "Half a Life". Or interesting acoustic interpretation of "Carrions" at the end of the album, as it says, "Adapted and recorded by Baptiste Maier". The album has some interesting twists in few songs and to me it sounds like a pretty solid position for a band's second album. It definitely shows that all musicians have talent and have already started showing some signs of creating their own style. And I'm guessing that each musician brought different inspiration to the table, but everything put together creates a unique style that is a good mixture of all musical interests from the band's members. Which again transpired on their live show, it was a material that was coherent, and each track sounded like a part of a whole. I could probably list all inspirations that you can hear on this album, but I think it's better to listen to it and find them all for yourself. They sound like they have been picked carefully and used to create something new.

Definitely a band worth watching out for and I am looking forward for their third full-length. And the live performance would definitely get 8/10, studio album is a bit too polished, especially when it comes to vocals. And definitely kudos to the band for already having their own, dry and crunchy, sound, which is very interesting when you combine it with the genre or subgenre they chose.