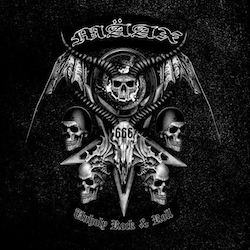 Follow up release from the album Dawnbringer, this album reflects that of Satanic rock and roll but is considered to fit into the genre of black metal. The lineup consists of Tim on vocals, Brett on guitars, Kyle on guitars, Jeremy on bass and James on drums. I wouldn't consider this band to be within the black metal genre at all except for the vocals sounding a little bit like Legion from Devian/Marduk. There is much to be said about this band that I will orchestrate.

Musically, they have distorted tone guitars with way heavy blues influence to their sound. All of the songs reflect this and aren't very fast paced at all. They have a distinctive groove to them featuring rhythm guitars with a crunch tone to them and heavy rock influence. If there's something to say about this band, it would be that they're highly skilled in achieving their album title as well as a very unique style of black metal that's finely played out.

Every song contains guitars that aren't highly difficult to play if you're a guitarist. They feature palm muted riffs galore mixed with distinctive rhythms that are noteworthy and highly innovative. The lead guitar bits are highly technical and played out with vigor. They suit the rhythms quite well and the vocals are raspy with occasional change ups, but not many. Tempos of the guitars for the most part are like I've mentioned, slow especially on the instrumental track. There's a clean tone guitar mixed with lead bits.

Even the faster tracks are still not that fast like blast beating. The song entitled "Overthrone" is more on the black metal end than the rest of the songs. This band doesn't play anything that's overtly heavy. The distortion on the guitars make them sound more thrash metal based. This is featured throughout the album. Some songs darker than others. Most of them dark though with a little kick to them.

I haven't heard their debut release, so I cannot compare this one to their debut. Something new is here with this album that I have yet to hear which black metal is played with a rock and roll style of guitar rhythms. I'm still perplexed by this. Not many bands that I've heard play like this, but the lyrical contents are mindless. It's not difficult to sing about Satanism. What is difficult is to hear a band play rock and roll style of guitar work with these lyrical concepts.

The mixing/production sound was a little bit flat sounding especially on the drums. But the vocals, guitars, bass, and drums are still in there pretty solid and well mixed together to compliment the album. The production could've been better, but for an underground band, the "raw" sound encompassed the album well to make it into a decent release. I suppose that they made this album with that kind of sound to fit into the overall darker fix to them.

Something's happened here that never does happen with a black metal band and again that's to be that of one who plays guitars with a rock base to them. This album isn't overtly heavy, but highly original and unique. I suppose that you could say Unholy Rock and Roll really fits with the sound of this album. If you're into rock, you may even take a liking to this release. I thought that it was highly unique and noteworthy. They really did a good job with achieving their goal of sounding highly original. Pick this up!