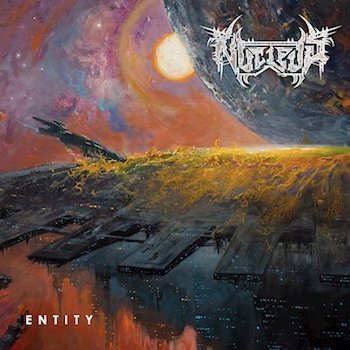 Following 2016 meteoric journey around the galaxy on Sentient, space conquerors Nucleus are back from the outer limits with their second full length Entity. Obvious comparisons were drawn to Demilich, Timeghoul and the likes at the time of the debut but 3 years later Nucleus goes deeper into a black hole and soars beyond its debut improving all aspects of their craft.

Entity plays with dissonant harmonics, time signatures and twists conventions of your typical death metal record yet still remains very sound as a whole. Subject yourself to special relativity experiment and you'll see that time slows down when 40 minutes of record duration feels like hours of interstellar travel. For as many weird and eerie cacophonous parts there is equal amount of quality grooves, it's just with their unconventional sense of timing and harmony you never know when the ship will swirl off its course. As example, after probing, poking and unpleasant drilling in very disturbing opening piece 'Arrival', title track 'Entity' comes with classic straight up death metal vibe which lasts for a whole 20 seconds and just when you start bouncing your head it takes a disturbing twist into Prong-like waco territory, long enough for you to say 'what the fuck', to take yet another turn and go into blast beat show with sick solo over miasmatic riffs. What seems like very vicious and condensed structure flows openly due to skilled transitions and flawless execution. In the middle of this space trip, instrumental 'Approach' quiets the asteroid storm with addition of keyboards and 'real' harmonies that made me hit replay button just to make sure I'm still listening to same band. The ethereal atmosphere is enhanced by occasional shift to neutral when Nucleus really slow things down to let listener enjoy the view and immerse into guttural barks from Dave Muntean. Production, which was one of the weaknesses of their first record, was corrected by mudding the mix with emphasis on the lower end and tasteful amount of reverb that in effect constructed spacier sound and let those unearthly harmonies breath making all 8 tracks ring as a cohesive unit.

Nucleus 'Entity' takes a while to get into and to discover all of its intricacies but once you fully immerse, you won't notice single eerie stroke but discern complete landscape of this adventurous excursion.