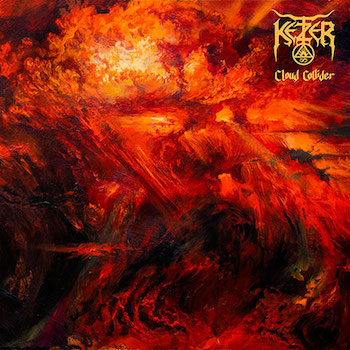 Ketzer from Germany is one of those bands that think change is a value in itself. Well, some formations need surely more change, because in some cases, every kind of change would mean an increase of quality. But the brigade of heretics ("Ketzer") started with a perfect debut - and this means that change can become your greatest enemy. And that's exactly the fact here, because the stylistic odyssey resulted in lukewarm, over-ambitious and partly pseudo-academic albums. Now comes Cloud Collider. It does not bring back the early days, but it has more power than its predecessor. Honestly speaking, they try to regain their old fan base - and this makes the whole change process all the stranger.

The album is my pill to schizophrenia. On the one hand, the group still consists of brilliant musicians who are able to create fantastic black thrash. On the other hand, I doubt their authenticity. In its best moments, Cloud Collider sounds like Satan's Boundaries Unchained without the juvenile energy of the debut. In the other moments, it conveys the vibes of a band that wants to be taken very seriously while showing its musical maturity. Many bands say they play the music mainly for itself and I am sure this is almost always a lie. But Ketzer might be one of those formations that have this mentality. Don't know. I just can say that they sit between the stools. Despite the raw vocals and some harsh attacks, the album does not have the dirt and snot of typical black thrash, but it also does not appeal to friends of adult metal.

The well-balanced production combines transparency and power so there is nothing to complain in this respect. Either way, Ketzer were always stable in terms of technical challenges and their manual skills are beyond doubt. But exactly this is the reason why it is all the more regrettable that they do not know their musical direction anymore. A solid number of tracks has exciting parts, but only a few of them, for example the multi-layered "(The Taste of) Rust and Bone", really leave a good overall impression. Every now and then some riffs appear which seem to be (pretty strong) leftovers of the debut, but you cannot recreate the same effect with this kind of approach. Ketzer should go home, take a tea, a joint or whatever they like and think about what they want to be. Everything else is a waste of time, or, to be more polite, results in a sonic document that cannot hide its weaknesses. Or, final alternative, maybe it just needs a more open-minded listener than I am..