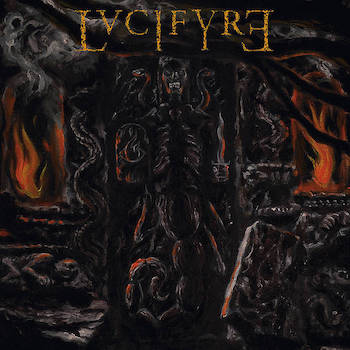 The beast of chaos and annihilation has been released. Sacred ceremony was performed and recorded under apt name Sacrament on cinders of what used to be No Solace Studio by the possessed trio known as Lvcifyre. If Svn Eater was a glimpse through the gates of hell, then this is a full tar bath with human blubber oils and stanch of moldered intestines inside the halls of the underground.

At first, I was disappointed that after 5 years of silence I was only presented with 19 minutes (not counting the cover track) of original material but now I don't think this sacrament could be conducted a minute longer without going completely insane. Actually, I don't think Lvcifyre are sane individuals anymore to begin with. Their mouths spit venom, instruments deliver demented melodies that have more in common with the sounds of lava burning the grounds than what an average Joe calls music and it all reeks sulfur from the speakers. From the first sounds of whatever the fuck they unleashed during the opening minute of this ritual T. Kaos gives his best vocal performance yet, becoming a possessed shaman completely controlled by his demons. He screams, wails, growls and vomits uncontrollable noises reciting demonic spells into a hypnotizing trance of chaos. Speaking of chaos, that dismal and discordant swirling of guitars is mixed with built-up atmosphere of each track going from ambient to violent outbursts that are a product of battering Menthors' drums. The blasts are executed with diabolic precision and in the most fitting segments of each track bringing the music to the point of explosion before toning it down with bewitching beat leading to the next act in this perturbed ritual.

The cover track of 'Morderca' from Polish cult black thrashers Kat definitely stands out from the rest of the material but in my opinion brings mixed feelings in the context of the whole EP experience. Lvcifyre put its own interesting take on the classic but because first 4 tracks create such a cohesive unit I found myself stopping the record after the 'Sacrament' to enjoy the filth and profound depravity of this devil worshiping act. It's an interesting bonus track but I wish it was on side B of the record for reasons mentioned above.

Sacrament is as ugly and desolate as the cover it came in. It reeks like old boiling abscess that needs to be lanced to fester the grounds with its demonic squeal. Lvcifyre's aversion to anything aesthetic is barbaric and vile, and I think they broke one of the seals of hell in the process.