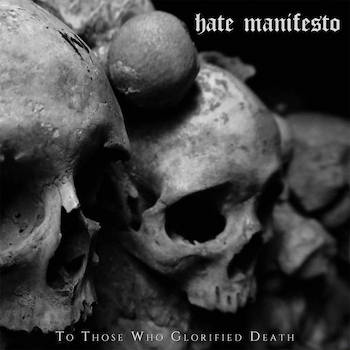 One of the greatest pleasures for me as heavy metal hunter is to discover really competent bands and sometimes it happens that a formation, which has been previously unknown to me, blows me away in a matter of minutes. Hate Manifesto, the name does not promise too much, celebrate an orgy of destructive energy and trample their imaginary foes into the grave joyfully. The deep, guttural and adequately monotonous voice comes from the musty vaults of death metal, the music mixes black, death and (trace elements of) thrash metal. But do not think of technical thrash, groovy death or mesmerizing black metal. As mentioned before, the band has chosen its moniker carefully. The guys attack with utter vehemence and their brutal, voluminous guitar work ensures that the sound does not suffer from any kind of weakness. This does not rule out rather slow sections. Inter alia the end of "The Arch of the Fallen" illustrates the violent beauty of the lumbering sections perfectly. The concise riff combines tragedy and grandeur so that it should be used as the soundtrack for the next funeral procession.

The playtime of less than 33 minutes cannot be described as opulent or overlong, but Hate Manifesto refuse to offer lame intros, interludes or any other crap. Superfluous elements do not occur. The music is focused on the essentials and just like a storm warning, it announces horrible things to come. Thus, the musicians sound the alarm right from the beginning. Blast beats and swirling mean riffs guarantee an intensive listening session. The sonic landscapes are cloaked in total darkness and no matter how often one lends an ear to the album, one will not be able to find any signs of clemency. I have no doubt that the dead who gracefully ornament the cover have been tortured with the sounds of this album. Okay, it is not surprising that some untrained listeners lose their life when facing numbers like "Disciples of the Iron Shield". Its high energy eruption after a more or less bearable mid-tempo part appears as a shock treatment. Yet already the opening title track demonstrates that these Hellenic preachers of destruction have a talent to stop a violent outburst by an abrupt break without hurting the flow or the lethal force of the composition.

There can be no doubt that the fascination of terrorizing sounds is unbroken as long as newcomers like these Greek realize their musical visions in such an overwhelming manner. And with that said, it does not matter that the production leaves room for improvement. The slightly dull mix does not fulfil the needs of hi-fi fetishists, but it’s cold and damp appearance emphasizes the sinister and almost inscrutable approach of the experienced duo. No doubt, these dudes are men of conviction, just see the thousands of bands in which they have already been involved. As a result, it does not make sense to pick out single tracks. Each and every piece calls for war and only if one intends to find the fly in the ointment, one can discuss about minor details like the slightly ill-defined ending of the already mentioned "Disciples of the Iron Shield". Instead of having a clear final point, it fades out in a pretty strange manner. Well, I guess there exist greater problems on earth. However, I am sure that legions of extreme metal fans miss a fanatic, uncompromising, and infernal feast if they do not check out To Those Who Glorified Death. Ravencult is still my number one from Greece in terms of extreme metal, but Hate Manifesto have the potential to usurp the throne of their compatriots. Brutality liaises with majestic despair and horror kisses contempt. Or, to say it with the band itself: "Primordial Barbaric Wrath" is presented. Maybe it will stimulate some wimps to glorify death while digging their own graves.