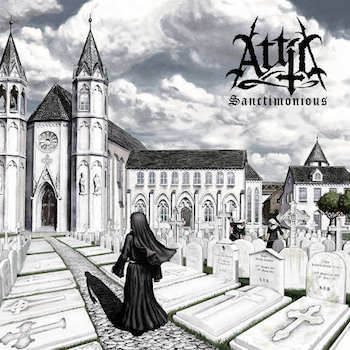 Okay, imitation is no crime and Attic's debut was a good album. Furthermore, Fate seems to haunt by the spirits they have summoned. So, we have a talented, lively group and a dead legend. Given this situation, I see no reason why the young Germans should not play this occult, melodic style. The Danish institution has never had the monopoly on this atmospheric yet heavy approach. One might discuss whether it is necessary that Attic's lead vocalist sounds like the little brother of the King while using many different pitches. Yet once again: it is no crime to transport this variable, often high-pitched singing style deep into the 21st century.

The great artwork points in the right direction and the same goes for the stylish booklet. Attic convince with a pretty spiritual vibe; the melodies are not at the expense of a profound heaviness and the highbrow song structures prevent boredom successfully. Well, sometimes the dudes have forgotten the old "less is more" principle, but generally speaking, the songs are not too opulent. Traditional metal (galloping guitars and mid-paced rhythms) is their fundament, but their progressive designs lend them a contemporary touch. Additional sacral intermezzos play their part in order to emphasize the concept story. Attic sing about the contrast between clerical ideals and human chasms. It is not a new finding that there exists a large hole between these two things... I would invite whoever is free from sin to cast the first stone. But be that as it may, Attic deliver classic and bloodthirsty lyrics that fit the aura of their musical way of proceeding.

Outstanding songs? Well, to be honest, there are no pieces that blow me away completely. Everything is solidly constructed, fillers do not show up and there is absolutely no reason to get angry or frustrated, but there are also not many songs which implement the feeling that I need to listen to them again and again. However, some sections send shivers down my spine, for example the ending of "Die Engelmacherin" (this title sounds sweet at first glance, but don't jump to conclusions) with its hypnotizing "killing her child" chant at the end or the slow yet intensive metallic parts of the brilliant "Dark Hosanna" which start with the desperate request "Take my life". Inter alia these sections get under one's skin. They show the potential of the band which is able to combine harmonies and harshness in an intelligent manner with the effect that a slightly mysterious mood is generated.

And so the entire output passes by, leaving a good overall impression and showing an amazingly mature band without offering a high degree of energy and dynamic. This does not constitute a major flaw, but the clerical surrounding of the story has led to a rather careful approach. The songs of the debut formed a very strong album, this time it is a good one. A little step back, but nothing to worry about. Attic are competent administrators of Mercyful Fate's legacy who have internalized the special charm or fascination of the once innovative style. And who the hell cares about imitations?