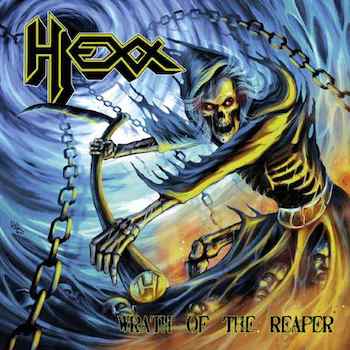 Some bands are an enigma and Hexx is one of them. In view of their death metal trip, it seems as if they have never found their style. Now their comeback album has been released, 26 years after their last full-length. The line-up of their best album - Under the Spell - is long gone. Only guitarist Dan Watson has survived, and this kind of "re-union" is always dubious, especially after such a long hiatus. Drummer Jon Shafer has already been part of the line-up in the last century, too, but he did not play on the aforementioned classic.

Personal issues aside, the comeback work wants to go back to the first two albums. Yet two things must be considered. Firstly, the album sounds pretty antiquated with its squeaky solos and a totally average guitar sound in general, and, secondly, lead vocalist Eddy Vega fails. His down-and-out voice sounds thin and shabby. This is not the way to create "Under the Spell" vibes, irrespective of a few very traditional melodies like that of the title track's chorus. Really inspiring elements do not show up during the eleven songs with a playtime of more than 50 minutes. (By the way, a CD bonus track is a ridiculous reminiscence to the old days...) Frankly speaking, Hexx provide handcraft, not art. Hence follows that Dan Watson is simply a liar when saying seriously that "we think this new album is by far our best offering". Give up, dude, we know it better. Each and every song of the A side of Under the Spell leaves the here presented numbers behind.

Does the band completely fail? No, that's not the case, although many songs are too long and lack compactness. Nevertheless, one can listen to all these pieces without getting pimples. Some details catch my attention, for example the opening riff of "Voices", but even this song does not fully convince. Nevertheless, due to its concise chorus and the dark atmosphere, this one belongs to the best tracks here. But all in all, the album with the extremely generic (not to say "stupid") artwork has nothing in common with those back-with-a-vengeance-comebacks such as "Tempo of the Damned" or "Forever in Leather". Okay, if one has a weakness for old school (power) metal with some melodic Maiden influences and a little dose of thrash, the new work of Hexx might be the right thing. Yet it lacks authenticity, energy and individual class. It is not enough to record just some new songs that look strictly backwards into the past while offering only well-known structures and ordinary guitars. It also needs a modicum of idea how to design and combine the present and the past. With regard to Wrath of the Reaper, exactly this feature is missing.