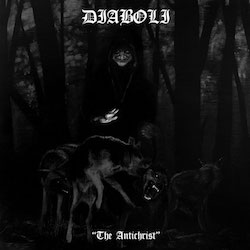 The Antichrist, oh no, not again. He is a well-known fellow for each and every fan of extreme metal. Back in 1985, he appeared on Destruction's "Infernal Overkill". Bewitched witnessed his rise in 2002. In 2012 Kreator thought he is just a phantom, but I guess we can be sure that he dwells everywhere, even in Finland and probably in close neighborhood to Santa Claus, who lives, as even all little children know, in Rovaniemi, Lapland. So, it was no big surprise that he made a courtesy call on Diaboli, a one-man-project from Suomi. Therefore, the artist behind this project called the album The Antichrist and everybody was satisfied.

Everybody? Yes, more or less everybody, because the album keeps the promise that it names makes. I freely admit that the technical execution leaves plenty of room for optimization, because its dull overall impression and the lack of differentiation cannot be ignored, especially during the fast parts. (Needless to say, that Petri was also responsible for the recording. Guess his circle of friends consists of his mother... and nobody else.) "Grim Winter" is the victim that suffers most from the mix. In general, seven of eight tracks are not able to reveal their full might and the remaining title is an atmospheric, pretty strong and somehow Nordic keyboard intermezzo which seems to be recorded in a frosty Polar night. Nevertheless, the vinyl does not disappoint. Petri, the artist who runs Diaboli, has enough creative potential to make a convincing offer. He does not show new options for the genre, but he operates skillfully within the given frame.

Once influenced by Burzum, Diaboli present a more brutal approach now. A minimum of riffs goes hand in hand with a minimum of breaks. Petri's guitar dominates everything, and he is obviously able to feed his instrument with effective notes. Nobody can deny that the guitar lines are aligned with the typical spirit of the genre. "Cursed be thy Name", the overlong opener, has both pretty monotonous, fast parts and melancholic excursions and maybe some very wise people might say that it is more than sufficient to listen to this track in order to be familiar with the entire spectrum of the project. But I don't want to be blamed by these omniscient creatures for not telling them the whole truth about the fifth full-length in the discography of the lonesome warrior. The massive tremolo picking forms great tracks like "Malicious Satanic Vengeance" or "A Sign for War" and I highly recommend giving them a try. Petri does not hesitate to plough the frozen Finnish soil and he does it with a fine instinct for flattening guitars and well-dosed dynamism, even though he does not create new genre highlights.

Slayer fell in love with the Antichrist in 1983, Gorgoroth kissed his pale face in 1996. "Sinful Birth", a great thrash album from 2017, was released by a band that wears proudly his name. You see, he is present at any time. Maybe he is even responsible for the smell of your running shoes or the unattractive spots in my underpants. It doesn't matter, because one thing is certain: he did not have a bad day when it came to the realization of the here reviewed work.