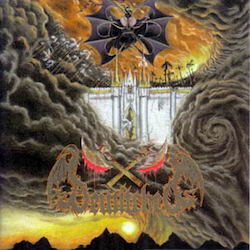 "Play it loud and blow your fuckin' brains out" is printed on the cd and that's exactly what you should do with this horny old-school black-thrash album. The opener with the cool title 'Hard as Steel (Hot as Hell)' starts with a catchy riff that runs through the whole song, the tempo reminds a bit of horse galloping. That makes you want to hear more of it. Also the other songs are in the old school style of the thrash/speed/black metal of the 80s and are convincing all along the line. Although the songs are a bit monotonous in parts, there are always cool riffs and breaks built in, so that you never get bored while listening. Although you've heard all of this somewhere before, the compositions seem to be quite independent and unique, and Bewitched cover almost everything from speed, thrash and black of the eighties.

Lyrically you don't take prisoners either, it's all about the horned man and his companions and servants as well as incantations to evoke him, as you can already see from the titles. The band photos and the cover, which probably shows the burning paradise over which the horned one ( or a mutated bat?) flies, are also fitting, which makes the band appear more in a black metal context, although I think that the music is also quite party compatible.

Especially remarkable tracks are 'Hard as Steel (Hot as Hell)', the beginning alone is gripping, 'Burnin'Paradise' with pretty cool riffs, 'Triumph of Evil' with very catchy melodies and 'Dressed in Blood', a song that increases in tempo, has a cool chorus and even (slightly crooked) clear vocals. There is a small deduction for the boring outro, which could have been shortened or left out completely. Four and a half minutes are much too long for that.

My conclusion about Diabolical Desecration is that you should definitely turn up the volume on your stereo while listening, as recommended by the band, open up a beer and then bawl along. It's a real pity that Bewitched didn't manage to keep their outputs at such a high level. But maybe there will be something new from them soon???

What happened to Bewitched? They released four great albums (and one stinker) and then they vanished into thin air, right? I am not willing to accept this status and I summon them to come back, because their last album Spiritual Warfare scored with many exciting pieces. But already their debut showed the potential of these filthy bastards. The almost logical consequence was that they got a deal with Osmose, the then most exciting label with bands such as Marduk, Immortal and Impaled Nazarene.

Bewitched's debut spreads the nasty charm of black thrash in a glorious manner. This is no humorous work, but the effective riffs and the smoothly flowing songs just make fun. Don't get me wrong. the fact that the songs boast with very well-designed guitar lines does not mean that they are harmless or cute. Of course not. The mean vocals alone ensure the appropriate quantum of evilness. They seem to be done by angry dogs that have accidentally learned the English language and now they are condemned to sing for the rest of their pitiful lives, albeit they know just one single tone (if we neglect some very crude lines at the end of "Dressed in Blood" and a spoken part in "Blade of the Ripper".

But their rather monotonous barking does not have a negative effect on the songs. Especially the material of the first half is filled to the brim with strong riffs, swift sequences and a somehow natural malignancy. Real jewels show up, for example "Born of Flames" with its insidious backyard riffing or "Bloodthirst", an almost epic number with intensive verses. Both pieces have in common that their choruses do not lack a special form of catchiness, because they combine easily consumable lines with an unbridled greed for underground metal. Bewitched are definitely immune against lackluster fillers and so the album spreads wild vibrations. And please do not forget that we speak about a work of a Swedish band, released by a competent label. This means both musicianship and technical implementation do not suffer from flaws. Diabolical Desecration sounds exactly like a black thrash output should sound, even though it is rather transparent than slightly grimy.

Weaknesses are hard to find. Every now and then, a solo appears and some of them do not really add value to the songs. The guitar-free instrumental is rather superfluous, and its atmosphere does not fully meet the mood of the remaining songs. The title track is only an overlong outro with some atmospheric gimmicks and martial drum rolls. Finally, some of the presented riffs are in very close proximity to each other. However, all these details do not kill the elemental power of an album whose songs come to the point directly. Bewitched know the value of straightforwardness and the dexterous execution of their musical ideas deserves respect. Their interpretation of black thrash is generic, just have a look at the song titles, but vigorous, infectious and hot-blooded at the same time. In my humble opinion, Diabolical Desecration lives up to its name and is still the best album of the Swedes. Too bad that the band preserves its comatose state for the past twelve years.