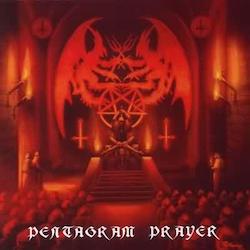 Bewitched's second album is as catchy as its title. Pentagram Prayer turns the listener on with a couple of highly effective choruses which leave their mark in a dominant way. I strongly recommend you to find out the special moments of this full-length. Anyway, I would like to begin with some general statements.

Bewitched commute between rarely appearing traditional sections, for example at the beginning of 'Demondawn', and speed metal eruptions. The band has an affinity for fast-paced rhythms and it makes no secret of this fact. Nevertheless, the Swedish formation does not appear one-dimensional. Among other things, the short blues part, which shows up at the end of 'Sacrifice to Satan' demonstrates their interest in other styles. Fortunately, the group does not over-estimate the relevance of external influences. The abrasive guitars mostly feature typical metallic lines and the band's unerring instinct for explosive arrangements guarantees a dynamic overall impression. Not to mention the dark aura of the album that constitutes another important component. I confess that the atmospheric title track is nothing else but a (rather senseless) sinister outro, but the riffs of the eleven regular songs possess the right amount of negativity. The hostile vocals of Vargher and Blackheim point in the same direction. However, the guitar work shapes the album and the pieces have an exciting flow. The riffing is smooth yet somehow dangerous at the same time. Bewitched do not need an arsenal of nuclear weapons in order to kill a lot of people. A very well sharpened knife is their first choice.

Although the (mid-paced) New Wave of British Heavy Metal seems to be an inspiration for the sound of Bewitched, the band develops its full force during the fast songs. 'Hellcult Attack' celebrates an orgy of sharp riffs that meet a hyperactive yet precise drummer and the chorus crowns their cooperation. Listen closely to the barked "Attack! Attack! Attack!", it expresses the power of an entire genre. The album includes a lot of highlights, but this masterpiece of elegantly performed thrash / speed metal stands definitely out. Nevertheless, the suddenly exploding chorus of 'Beastchild' also deserves the highest praise in view of its intensity, effectiveness and its phenomenal speed metal melody. Put another way, there are no downers on Pentagram Prayer. Those of you who only feel fine as long as they have a reason to feel bad will be disappointed. This album is just too strong to satisfy the needs of pessimists. Only the senseless intro of 'Night Stalker' sucks. Of course, women can behave very strangely. But according to my Middle European education, I guess violence is no solution. Anyway, this stupid intro of five seconds length is just a minor flaw and does not hurt the convincing overall impression.

The sound of the album emphasizes the guitars. Its traditional appearance is furnished with an overdose of power. Well, the bass guitar ekes out a rather humble existence. But I do not care about this. The technical implementation of the songs kicks ass and puts their aura in the right light. Bewitched perform their pieces like the less nasty version of their compatriots of Nifelheim. Although their sound does not possess the same amount of filth, the songs breathe the same spirit. Long story short, Pentagram Prayer is aggressive, snotty, and it shines with an amazing amount of gripping guitar lines. Speed metal fans will love it and open-minded traditionalists should give it a try as well.