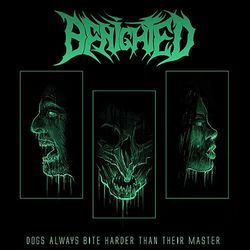 This is a release which completely caught me off guard, time wise. I mean the band had just released the fantastic Necrobreed just a year before, so it was surely not enough time for a new full-length album. But an EP? Hell, I don’t imagine a lot of us will say no to that.

I think it was also a smart choice on Benighted’s part, to do a test EP before their new full length. A sort of test of the waters, because something that not perhaps everyone will be aware of is that Benighted have actually lost their primary guitar player and song writer, Olivier Gabriel. Not only was he a founding member of the band, but the riffs he contributed were enormous. So, it will be interesting to see what current guitar player Emmanuel Dalle can bring to the table, along with Olivier’s replacement, Fabien Desgardins.

One very positive addition to the band is new drummer Kevin Paradis. I’ve been following this guy closely for years on YouTube and he absolutely crushes. While it was a bit sad to see Romain Goulon disband due to health reasons, I don’t think Benighted could have found a better replacement than Kevin. Pierre Arnoux is on bass duties, and Julien is of course on vocals.

“Teeth and Hatred” kicks off this EP, and there’s no mistaking that this is Benighted. A little different than what we are used to perhaps, but still Benighted. While the song has some interesting sections (and a very nice intro), the riffs just aren’t there like they used to be. Kevin does a fantastic job working his way around the kit, especially during the verses. The song moves forward with conviction, but honestly, this EP could have had a better start than this. But thankfully things pick up very quickly with the arrival of “Martyr” - an absolute screamer of a track. Julien lets loose on his vocals and let’s get something straight - there is no other death metal vocalist out there that can touch this guy in my opinion. He’s the Swiss army knife of metal vocalists. Screams, squeals, gutturals, you name it, the guy can do it. And as always, he changes up his style on the fly like it were nothing, usually during the same verse. The drum work is outstanding, Kevin is left free to just let it rip, and he doesn’t hold back; some intense drumming throughout, with the guitars roaring, possessed, behind him. This is what Benighted do best.

The final original piece of music on this EP is titled “Dogs Always Bite Harder than Their Master”, which despite the ridiculous title, has quite a different vibe than the rest of the EP. The band go into infrequently uncharted territories, relying more on atmosphere than brutality. The song has many sections so it’s not just an atmospheric track, but those sections could have been arranged better in my opinion. In its current form, the track seems to be a bit all over the place, and has a problem maintaining a natural flow to the music.

The rest of this EP is not just filler like a lot of another EP’s out there. A cover of “Slaughter of the Soul” originally by At the Gates, of course, is present, and it’s done really well. Benighted has always enjoyed doing covers and paying homage to artists that they like, and I really enjoy that about them. So far, every cover they’ve ever done, they’ve made it their own somehow, and elevated the originals. This is no different, it’s extremely well done. We are then greeted with six assorted live tracks, and while I’m not really a fan of live records for the most part, Benighted are quite enjoyable to listen to live, even when it’s just audio. They’re a band I would love to see live and wouldn’t miss the opportunity, however, sitting at home listening to their live recordings isn’t really my cup of tea, even though they’re enjoyable enough.

Overall, I’m happy that they released this EP. It’s strange hearing them without Olivier, but the remaining guys have done a fine job. “Martyr” is a really fantastic song, though not quite sold on the other two originals on here. This definitely has potential - I guess we’ll just have to wait and see where they take the band next. But wherever that may be, I’ll be there with sharp ears and a notepad.