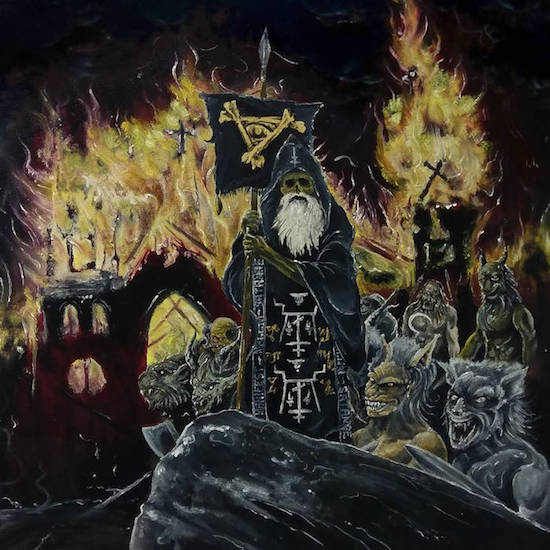 Black metal from Finland is usually a good choice, even if it is disgraced with a childish artwork. Malum, another formation that intends to reach "purity through fire", has already recorded its third full-length and the opener illustrates blatantly that these guys are not able to present just one new tone. Everything has already been showcased a thousand times before. Or ten thousand times before, who am I to know the exact number? But there is one thing I know very precisely. I don't give a f**k about the aforementioned fact. Black metal has an exciting core which is immune against any kind of wear marks. Given this situation, there is no need to combine it with folk, ambient, suicidal or symphonic elements, even though a few bands have produced acceptable results while doing so. And no, Striborg is not among them.

However, Malum have only learned the basic rules of the sub-genre. This means they connect clanking guitars with clattering snare beats, or they bring lugubrious lines and slow drum rhythms together. They are not overly interested in creating atmosphere during the first two pieces, but the third, slightly Darkwoods My Betrothed-influenced track "Days of Slaughter and Destruction" finds a remedy. I freely admit that I did not expect it to do so in view of its pretty direct name... My misjudgment aside, Malum confirm the old rule that even black metal songs profit from a minimum of melody. It's not the first time and it won't be the last time that hoarse screaming and a poorly produced drum do everything in order to make it hard to find these melodic ornaments, but believe me, they exist. Sometimes I wish that there would be more bands that left the black metal university after having understood the basic rules and nothing else.

Perhaps with the exception of the third track, the songs do not differ very much, to express it mildly. Malum know the paths their more prominent compatriots like Horna or Behexen have already taken and they follow dutifully. Anyway, I only can say it once again: that's neither a shame nor a crime, because the quintet is good in what it is doing. The songs do not lack dynamic and they know for what they stand for. Pure, generic black metal is the name of the game and those who do not like this agenda - please f**k off (sorry for my vulgar language, but some things want to be expressed clearly). I am pretty sure that Malum do not disappoint any fan of the music Satan loves so much, even if a few parts sound like black metal by numbers. The devilish gang also does not add a new dimension to the sub-genre, but how many legions of Lucifer have been successful in doing so? Mayhem and Burzum, maybe two or three formations more, have defined the cornerstones and this has happened almost 30 years ago. Okay, I should not forget the heroes of the first wave, anyway, you can count the really innovative bands on amputated fingers as long as we speak about pristine black metal.

The closer cannot keep up with the remaining tracks, but all in all, this album delivers another tesserae to the overwhelming monument of the demonic style. A less sticky production would have been helpful, but the here presented mix does not ruin the compositions and maybe it is all just a question of the budget. Therefore, I have no serious problems with Legion, an album whose compositions constantly circle around the fiery core of the sub-genre. It's just Finnish or even very Finnish black metal, no more, no less - and that's a good thing.