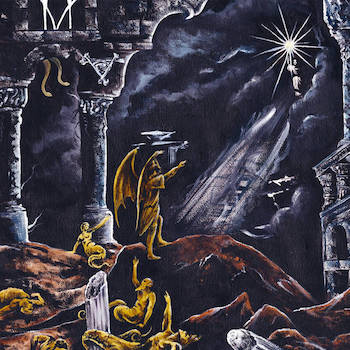 Strange story. The title of the opener is "O Satan, O Lucifer", but the CD display in my car shows "O Darkness, O Lucifer". Is this a Christian conspiracy against Malum or, even worse, against me? Well, I think I have nothing to fear as long as I pay the church tax while listening to black metal permanently. It's always good to have a connection to both sides as long as we do not know whether good or evil will win. And as a convinced opportunist, I will not say which side is good and which one is evil, haha.

Malum's full-length from 2017 offers generic black metal, not overly spectacular or totally radical. One can say we have heard this mid-harsh approach a thousand times before or one can say black metal supporters never can get enough of this style. Both statements are right. The musicians behind the name Malum do not form the revolutionary cell of the Suomi's black society. Instead, they are competent ambassadors of the style their country is well known for. This includes a pretty undifferentiated yet appropriate production. Night of the Luciferian Light has a comparatively dull sound, that's true, but only listeners who are not familiar with the genre will be seriously concerned about this.

Well, no orgy takes place in the night of the Luciferian light. "Perdition" marks a stormy outburst of hate and catapults the band into the territory where Azaghal are always in search of the next thing they can destroy. This kind of sonorous background noise is always welcome. However, even this song houses a relatively long mid-tempo part with hymnal elements. No doubt, mid-paced sections give this album a face. It goes without saying that the typical, raw vocals and the occasionally thundering double bass prevent a lukewarm appearance. Nevertheless, this record is rather for friends of Barathrum's "Occult" than for those who went crazy while inhaling Behexen's masterpiece "By the Blessing of Satan". And honestly speaking, sometimes I wish they would accelerate the tempo and the degree of malignancy. "Altar of Ritual Death", for example, would have profited from more aggressive up-tempo sections. On the other hand, the album is free from strange sound collages, useless intermezzos or further nonsense.

The title track closes an album. The final song bundles the different facets of this work. It presents a mix of rather melancholic parts and furious, dynamic sequences. Black metal lives from its intensity and that's the reason why I prefer the more brutal sections. Too many meditative riffs can hurt the true spirit... and the same goes for a conspirative or just shitty display of a CD player. Thank God, I drive a company car and I get a new one next month. Either it shows the right title of the opener or I will never again listen to the album while driving down the German autobahn.