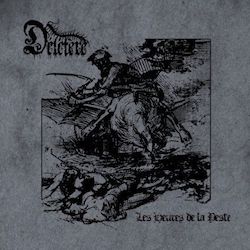 Rumbling, somehow awkward sounding guitars characterize the production of Délétère's first full-length, dated 2015. This is a sound one has to get used to. The massive and more or less lumpy mix contradicts the actually fine leads and melodies. This is not as bad as it sounds, because this kind of inner conflict gives Les Heures de la Peste a certain individuality. By contrast, the hoarse and baleful voice does not provide a special contribution. Sometimes icy, passionate screams appear that build a bridge to the most extrovert Scandinavian black metal singers. But this is not as bad as it sounds, too. To close this chapter, the production is not outstanding, but okay.

What about the musical content? Délétère originates from Quebec and they fulfil every expectation in terms of style. At least the fast sections of the duo's compositions lie in close proximity to the songs of their neighbors. I am speaking of Forteresse, Csejthe and comparable bands from the constantly boiling Canadian metropolis. One could also mention Sanctuaire if one leaves their ambient pieces out of consideration. But wait, the here reviewed work also houses some ambient elements. However, do not think of endless keyboard lines that wander alone through the barren prairie. Songs like "Aux Thaumaturges Égarés, une Étoil Nécrosée" create a desperate, sinister atmosphere without neglecting the metallic fundament. Lonely guitars deliver the soundtrack to a sad scenario while darkness falls over the land, but they are mostly accompanied by the infernally echoing lead vocals and the reliable rhythm section. By the way, this piece with a duration of more than seven minutes shines with its compositional coherence - and this coherence is no exception, but the standard. The dudes mostly deliver intelligently constructed tunes, and this is not a matter of course when it comes to a debut work with eight songs that clock in after 48 minutes.

The album - which is equipped with a stylish booklet - generates a very uncomfortable feeling due to its strict leads and the painful yelling. The ecclesiastical choirs at the end of "Une Charogne Couronnée de Fumier" also create ambivalent emotions, to say the least. It is amazing to see that both sides of the band work very well. The raging outbursts and the atmospheric sections complement each other in a good manner. "Credo II" is the prime example. Its Forteresse-like high velocity parts shine with fascinating leads and pure vehemence, while the gloomy yet extremely heavy episode which sets in at 2:40 minutes delivers the perfect supplement. No doubt, it seems as if Quebec has become a guarantor for high class black metal with an unmistakable flavor. To cut a long story short, if one likes cascades of guitar lines, fervent vocals and a high degree of dedication, Les Heures de la Peste has a good chance of becoming his or her album of the month. Great songs like "Le Lait de l'Essaim" are not ten a penny. Indeed, the mostly fantastic compositions let me forget the slightly dubious production. Honesty speaking, I want to hear more of Délétère.