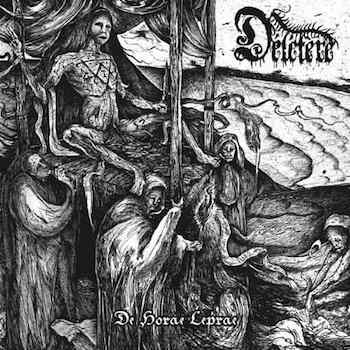 It´s time to return to one of the most prolific and respected black metal scenes in the world, the one of Quebec. This Canadian region is well-known due to its strong pro-independence movement. This time and contrary to other highly rated bands, I am reviewing a band with, as far as I know, no political connections at least, if we speak about the lyrical contents of their albums. The band is called Délétère and it was formed in 2009 by Atheos and Thorleïf, who have been the unique permanent members of this project, only accompanied by several musicians who helped them in the studio or on stage. Both members have previous experience in excellent bands like Forteresse or Utlagr, just to say they are strongly connected to the extreme metal scene of Quebec. Though the band exists for nine years, they have only released two albums, the excellent debut Les Heures de la Peste and the new opus De Horae Leprae.

The new effort has a similar concept as the debut album. The lyrics deal with medieval times, and specifically with death and mortal diseases. This time, the album´s concept seems to deal with leprosy, another disease very frequent in the medieval times. Musically speaking, Délétère continues with the tradition settled by other bands of the scene. The band plays a kind of aggressive black metal, focused on powerful riffs, melodic and atmospheric. If I should compare the band´s sound to, for example, Forteresse, I would say that Délétère has a darker approach fitting perfectly well with the tenebrous lyrical concept the band develops. The second track, 'Cantus II-Sagina Caedencis', is a fine example of somber guitar chords, which open the song and later accompany the main guitar riffs. But it´s not the unique example of this somber tone as a song like 'Cantus V-Figura Dysphila' has also some especially dark sections. Though the album has in general terms a very aggressive tone and was very focused on creating powerful riffs, the band adds, from time to time, some elements to enrich its musical offer. For example, the opening track, 'Cantus I-Teredinis Lepra' or the fourth song, 'Cantus IV-Inopia et Morbo', have occasional keys sounding like an organ, which of course fits with the medieval concept behind the band's music. This use is increased in the last track, 'Cantus IX-Oratio Magna', my favourite song, as it sounds more medieval and atmospheric than any other song of the album, mainly thanks to these organs. What about the vocals? Well, I can safely say that Thorleïf delivers as a vocalist. His screams are powerful and high-pitched, they are easily audible as the production is quite good, raw enough, but with the majority of the instruments and the vocals themselves, easily distinguishable. Vocally speaking, we also find tiny tries to add some variety as the band introduces some clean vocals, which sound like a dark choir, very medieval yet again, tough they are scarcely used in songs like 'Cantus II-Ichthus Os Tremoris'. The album has overall a quite fast pace, though the drums have a healthy combination of blast-beasts and slightly slower sections, almost never really slow but something between fast and mid-paced patterns, which obviously help to create non-monorithmic songs.

To sum up, Délétère has released a very good sophomore album which I wouldn't define as a masterpiece, but a very enjoyable black metal album with some nice touches, which make it an interesting listen. Very recommendable if you follow the excellent black metal scene of Quebec.

Métal noir Québécois is still a young movement and its unspoilt energy has already enriched the global black metal scene. Endless guitar lines characterize the new sound and Délétère is a very good representative of this amazing style. The dudes took the direct way into my metallic heart with their debut and the subsequent EP and therefore it was a matter of course to buy their new full-length. The promo sheet tells me that it is a concept album about a leper who becomes both a prophet and the incarnation of the plague, but the French language gives me no chance to understand the probably interesting details. Nevertheless, I like the fact that they use this language, even though the lyrics do not deal with patriotic topics. It is an identity creating feature of their sub-genre and it has its own special sound which fits much better to metallic infernos than I thought.

However, nine "French" songs in 64 minutes are by no means an easy listening stuff. In spite of the coherent song patterns, it takes a little time to feel comfortable in the cosmos of the Canadians. But as soon as one has a grasp for their way of proceeding, the songs shine in full bloom and they grow with every new round. It remains a mystery to me why they have recycled a track of the excellent EP, yet this is no problem at all in view of the opulent playtime. The new version of the wild, blustery and phenomenal "Cantus IV – Inopia et Morbo" blends seamlessly with the new material, because the stylistic approach has remained unchanged. This means that the band unfolds its entire repertoire of dramatic, furious, desperate and aggressive yet mostly melodic elements, while the velocity is more or less constantly high (only the eighth piece presents a calm intermezzo). The complete material avoids trivial flatness, quite the opposite. Tracks like "Cantus II - Sagina Caedendis" reveal an enormous depth and create a sombre atmosphere.

Generally speaking, each and every tune boasts with vibrancy. Fire enlightens the path of the divisions from Quebec and the here reviewed work does not intend to decrease the temperature. The material is like a vortex that drags the listener directly to the torrid center of the earth. It does not lack rough edges, nonetheless, the irresistible flow of the compositions, another trademark of Quebec's legions, deserves respect. Moreover, the single contributions do not suffer from fundamental flaws. The charismatic lead vocals, for example, express many different emotions like fear, despair, fury or hysteria. Although the instrumental wall of sound takes its toll, the voice is not pushed into the background. The drums sound slightly blurred, but I guess this is just a collateral damage in view of the hyper-fast hammering that shapes broad parts. Keyboards and organs also show up, presumably due to the religiously motivated concept. But no need to panic, they are well embedded and increase the density of the sound. The "shortest" track (5:42), "Cantus V – Figura Dysphila", is among those numbers which prove evidence that keyboards can add value to the sound of the Canadians. By the way, the same goes for the timpani in the seventh track.

All in all, there can be no doubt that Quebec's scene is a force to be reckoned with. Even better, it stands firmly on its own feet. One can argue that Délétère's sound is not original, because it equals that of Forteresse and further bands from the Canadian metropolis. But the black metal explosion in this town is exactly based on this sound and the comparable approach of the different protagonists has become the most important characteristic of this movement, because it shows impressively that the whole is more than the sum of its parts. So, thumbs up for an album that avoids boring ambient sequences. Actually, promising bands like Sanctuaire that have yet to unleash their full potential, can learn from this output how black metal really works. The fantastic, eclectic and majestic yet predominantly fast closer alone has everything it needs to stimulate the ambitions of the band's competitors (and my ambitions to take a trip to Quebec). Furthermore, it is the final proof that the album deserves a rating of, well, let's say 9.1. So what else can I do?